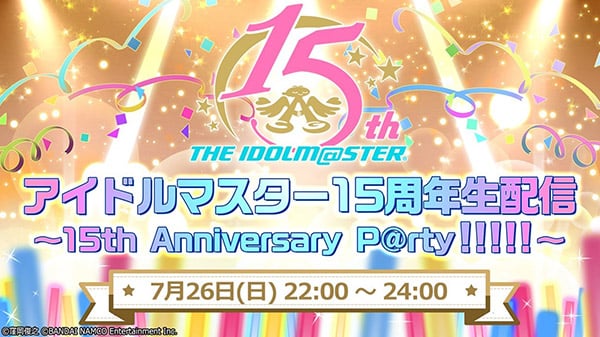 Bandai Namco will host a “The Idolmaster 15th Anniversary Party” live stream on July 26 from 22:00 to 24:00 JST, the company announced. You will be able to watch it on YouTube, Niconico, Twitter, and Asobi Store.

The event will celebrate the 15th anniversary of The Idolmaster by looking back on the series with various guests. Presenters include:

Bandai Namco will also launch a The Idolmaster YouTube channel on July 24. To commemorate its launch, as well as the series’ 15th anniversary, Bandai Namco is planning two days of live streams with 15 hours worth of programming. The full schedule is as follows (all times are JST):

The latest entry in the series, The Idolmaster: Starlit Season, is planned for release on PlayStation 4 and PC via Steam in 2020 in Japan. Read more about the game here.

Chef Boyardee Sakuga ⋅ NEO: The World Ends With You announced for PS4, Switch ⋅ one minute ago