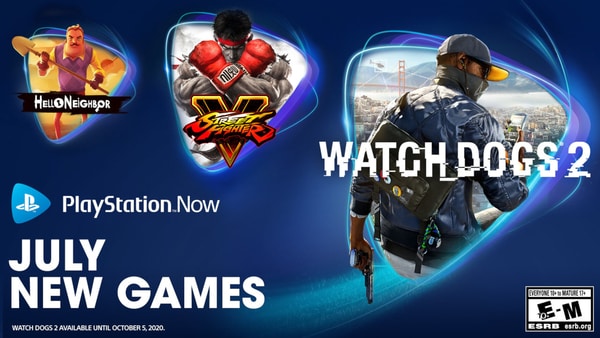 You are Marcus Holloway, a brilliant young hacker and the latest recruit to the San Francisco arm of DedSec. Equipped with an impressive array of skills and tools—including an RC car and a drone—the whole San Francisco Bay Area is your playground, from Silicon Valley to the downtown streets. Break into any electronic device, computer system or vehicle, collect information on every citizen, and infiltrate the infrastructure of an entire city as you fight alongside the hacker community against an immoral establishment.

Available to download (PS4 system only) and stream until Monday, October 5, 2020.

The legendary Street Fighter series returns to deliver non-stop fighting action on a global stage. Play fan-favorites Ryu, Chun-Li, and other iconic characters as you rise through the world rankings. Challenge fellow PS4 World Warriors on the Capcom Fighters Network to see who will rule the ring!

Hello Neighbor is a stealth horror game about sneaking into your neighbor’s house to figure out what secrets he’s hiding in the basement. Play against an advanced AI that learns from your every move. Enjoy climbing through the windows? Expect a bear trap. Trying to escape? He’ll find a shortcut.

DarkRPGMaster ⋅ Nioh director: No current plans for Nioh 3, but hopes to return to series in the future; Ninja Gaiden news coming soon ⋅ 51 seconds ago

Hero? ⋅ Nioh director: No current plans for Nioh 3, but hopes to return to series in the future; Ninja Gaiden news coming soon ⋅ one minute ago

DeepSleeper ⋅ Shattered: Tale of the Forgotten King for PC launches February 17 ⋅ 2 minutes ago