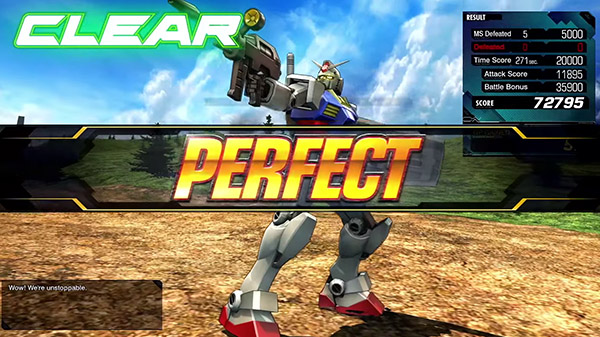 Here is an overview of the single-player mode, via the trailer:

What is “Maxi Boost Missions”?

Challenge more than 200 missions, customize units with the Enhancement Data you have acquired, and take on missions with even greater difficulty. This is a new mode for single-player with numerous elements only available in the PlayStation 4 version.

First, select a mission to challenge from the map.

Learn basic commands and EX Bursts in missions in Area A.

There are also bosses in each area. You can unlock the next area by defeating them. However, it is not that easy to take on and destroy the powerful bosses.

How do you defeat a powerful boss?

There are missions called “Break Missions.” Clearing these missions weakens the boss and makes it easier to destroy them.

Furthermore, customize the Enhancement Data that can be acquired after missions. Customize the unit to your preferences. Enhancement Data requires a number of slots for each equipment, and it is necessary to consider the combination when customizing. By accumulating experience and raising the player level, the upper limit of the number of slots that can be equipped will increase.

There are many different customizations available, such as the “Defensive Type” or the “EX Burst Type,” depending on the combination. “Defensive Type” is an Enhancement Data that reduces the damage received by one attack, and by setting multiple sets you can considerably reduce the damage dealt. “EX Burst Type” is where the EX Gauge and EX Burst is strengthened, and makes it possible to increase the EX Gauge when attacking or receiving damage as well as extending the time of the EX Burst.

A ranking system for the total score of cleared missions is also implemented. Compete with users all over the world.

Mobile Suit Gundam Extreme VS. Maxiboost ON is due out for PlayStation 4 on July 30 worldwide. Read more about the game here.