Also, there is a dragon.

Following an initial announcement last week, D3 Publisher has released new information and screenshots for Earth Defense Force 6, which is due out for unannounced platform(s) in 2021 in Japan.

The Lone Soldier Who Continues to Fight

The Storm Team no longer exists. Whether it occurred in the height of the chaos during the battle against “The Nameless” or whether after that is unknown, but the soldiers known as Storm 2 (Sergeant), Storm 3 (Grim Reaper), and Storm 4 (Spriggan) are no longer in this world.

However, there is one soldier who continues to fight even now. Could he be the hero once known as Storm 1…? 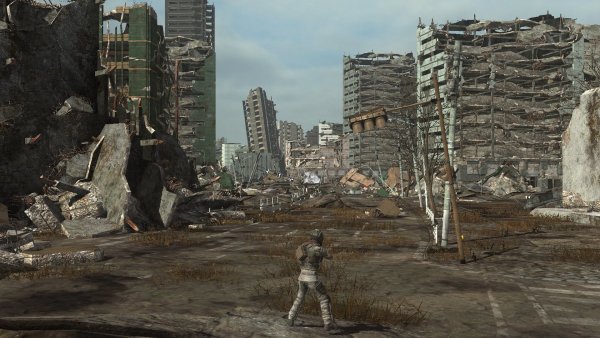 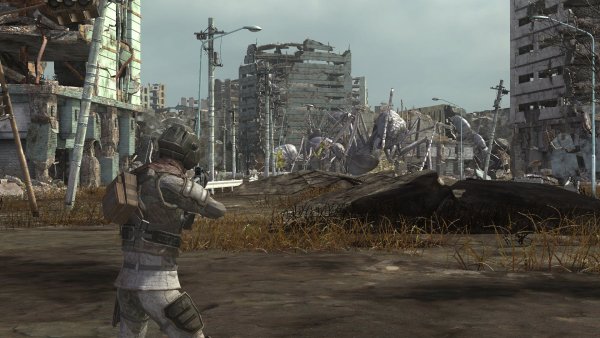 In the world of 2027, the aggressors have multiplied and the aliens have settled on Earth, but the war continued. But the amount of remaining strength in the organization known as the Earth Defense Force is unclear.

In today’s screenshots, you can see a soldier like the special forces infantry Ranger of the past, but with a slightly dirty and less vivid appearance.

The appearance of the friendly forces cannot be confirmed at this time.

—The special forces infantry Ranger at the start of the war in 2022 (during Earth Defense Force 5). 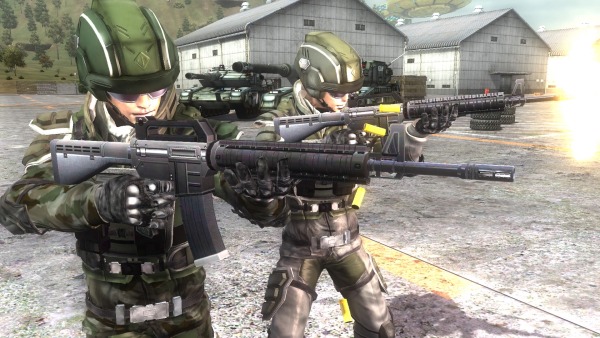 —Today’s reveal shows a soldier fighting—seemingly Storm 1. His equipment is slightly dirty, and his attire gives off the look of a guerrilla soldier. With a less vivid appearance compared to previous Rangers, what is the Earth Defense Force like in a world where civilization is on the verge of collapse? 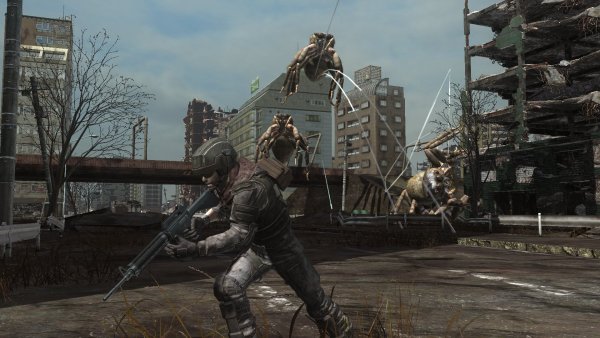 ■ The Many Threats That Remain

On the Earth departed by the Primers, aggressors such as the aliens left behind continue to breed and remain a threat to mankind.

● The Aliens that Have Settled Down on Earth

Humanoid alien foot soldiers brought in by the alien civilization known as Primers and left behind following the previous war, forming colonies and occupying cities all over the world. Other than their giant stature, they possess similar traits to humans. They are also highly adaptive to their environment, allowing them to breath in the Earth’s atmosphere. They possess various other similarities to humans including the same level of intelligence, organized combat, and use of a form of spoken language to communicate with each other. 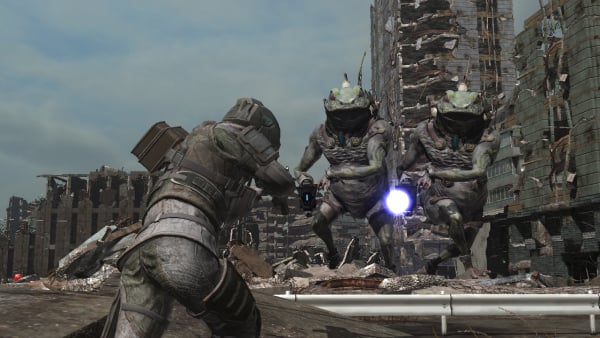 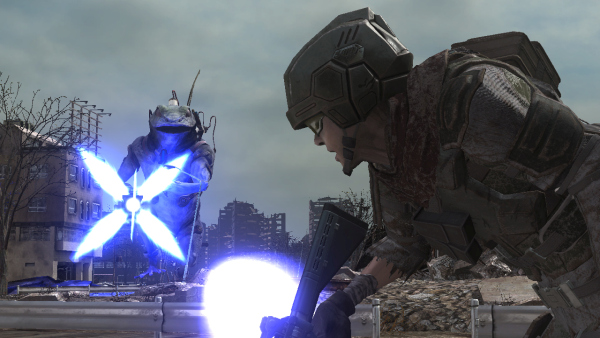 In the battle against the aliens, there is no safety in simply downing the enemy. Although mobility declines when they lose hands and legs in a battle, they are able to continue an attack. What is so frightening is that they have high recovery skills and are able to heal themselves by regrowing their dismembered limbs within seconds, regaining combat capabilities as if they took no damage. 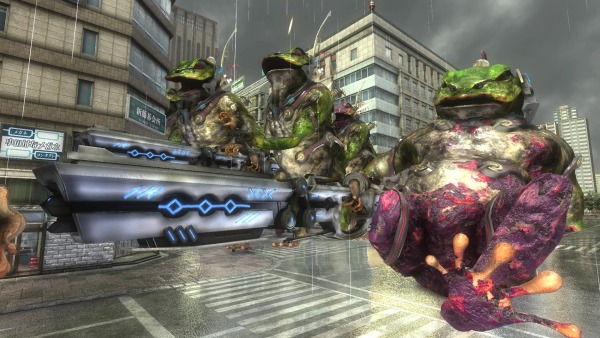 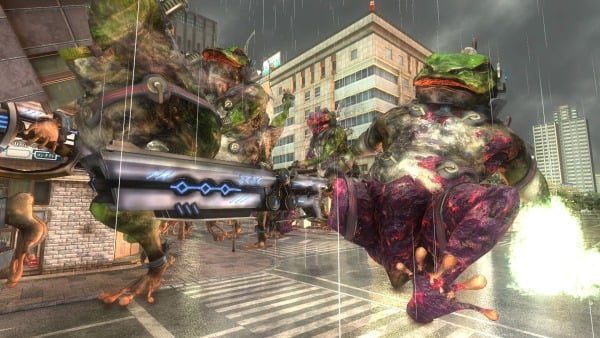 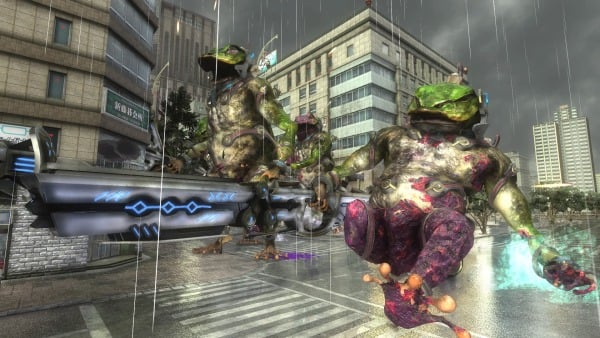 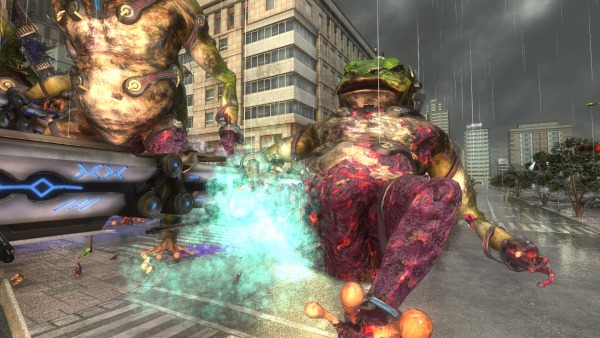 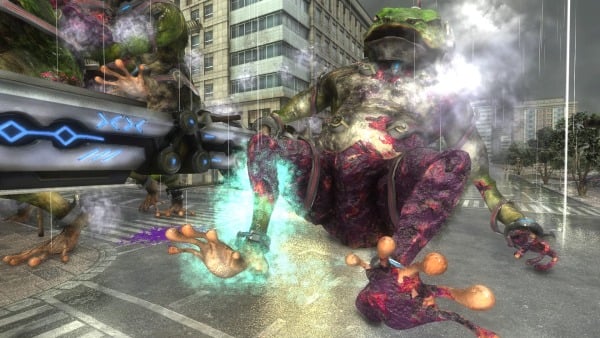 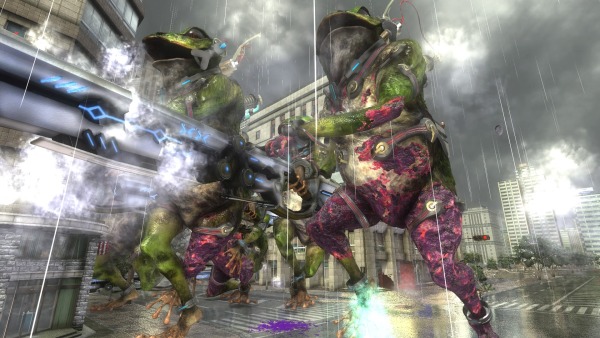 ● The Alien Creatures that Multiplied

Alien creatures brought in by the alien civilization known as Primers in the previous war. Due to their highly aggressive nature towards native species, they were given the name “Aggressive Alien Species α” (“AASα” in short). Approximately 11 meters in total length. They are surprisingly agile, even though they are giant as the size of elephants. They’re also capable of crawling up the walls vertically, with no visible decrease in speed. Their primary weapon is their big fangs, but the most dangerous weapon is their ability to spray strong acid. This acid can reach targets up to 100 meters away and people confirmed the metals melting within seconds. 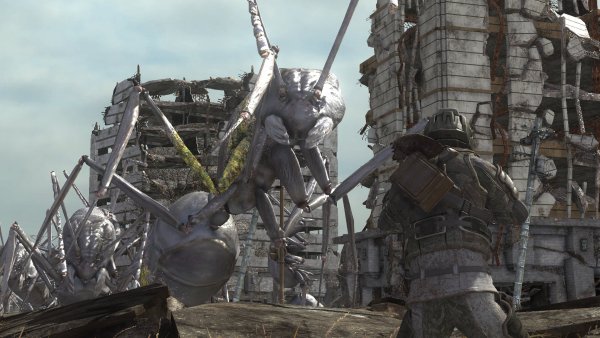 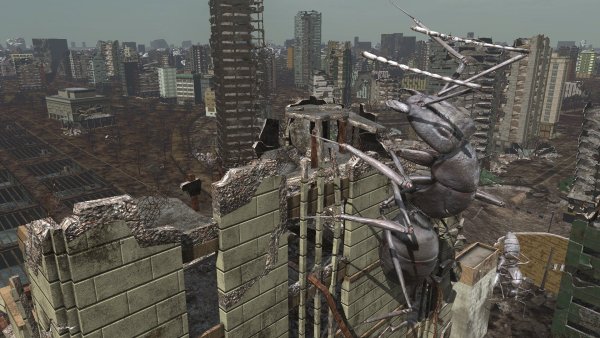 Alien creatures brought in by the alien civilization known as Primers in the previous war. They are code-named “Aggressive Alien Species β” (“AASβ” in short). Even though they were thought to be far less agile than “AASα,” they have high jumping power. They have high combat capabilities and an extremely long attack range, where it spits out a thread containing a strong acid. It is extremely dangerous to be surrounded, as you will not be able to move if hit by multiple threads. 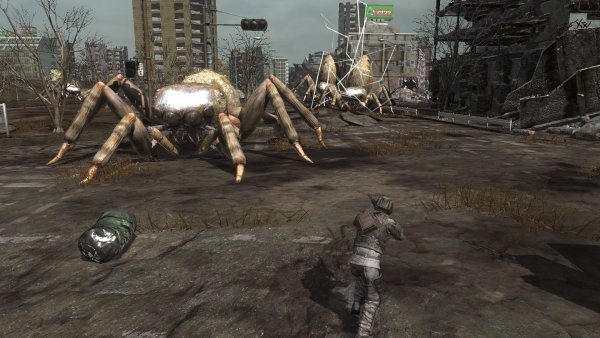 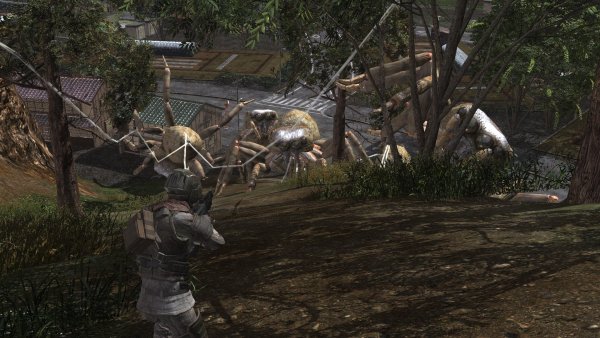 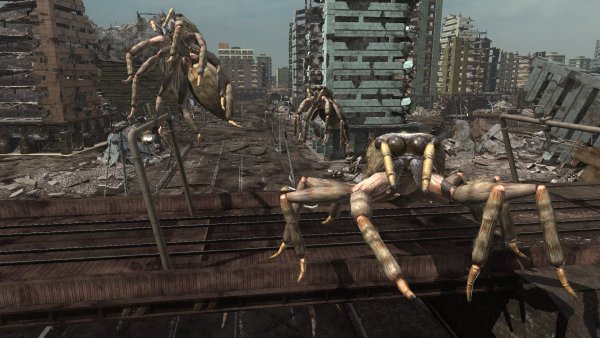 An aggressor with flight capabilities, its threat level far surpasses that of the “α” and “β” aggressors. Despite their large build, it can fly at high speeds and has very high combat capabilities. It attacks by emitting needle-like tissue in midair, which are powerful enough to penetrate even AFV armored vehicles.

—One soldier versus the Flying Aggressors. 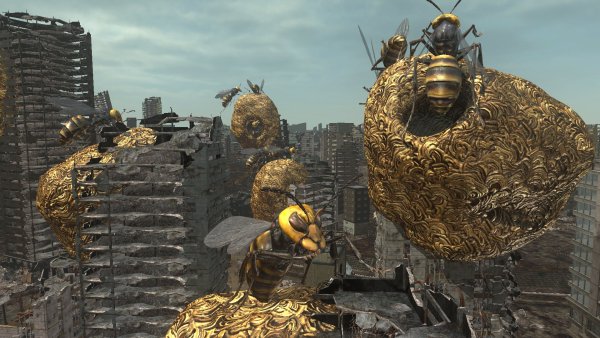 —The Flying Aggressors build hives (nests) and breed in high-rise buildings in abandoned urban areas. While mankind may have won the war, the breeding expansion of the aggressors was out of their control. Is this how it is all over the world? 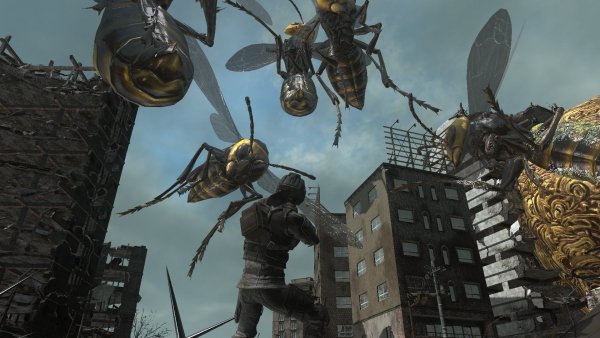 ■ More About the World of Earth Defense Force 6

Earth Defense Force 6 has finally been announced. Read on to learn more about the world from the screenshots that have been released.

Please take a look at the following screenshots: 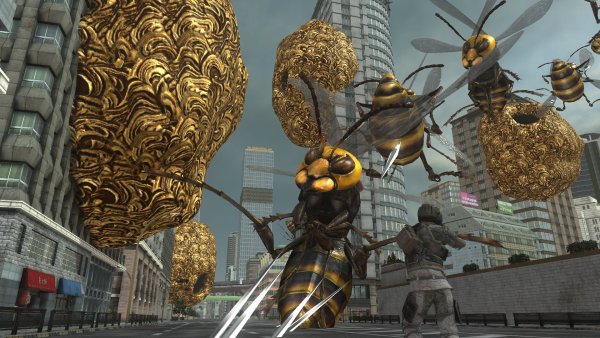 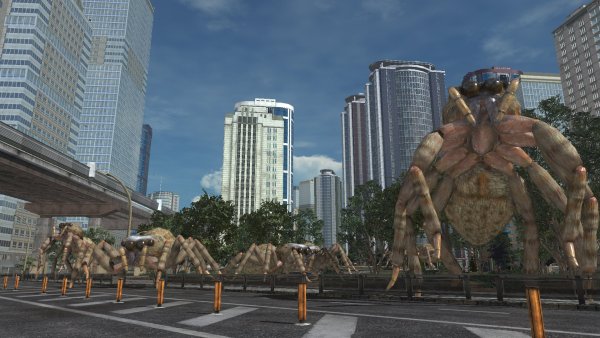 So far, we have only seen images of ruined urban areas, but it appears that there are still some cities that were not destroyed. However, even seemingly safe cities are being overrun with aggressors and building hives in their high-rise buildings. Are humans really living in this city? No… can they even live in these conditions? It is probably already a ghost town… or rather, transformed into an aggressor town.

Now, please take a look at the following screenshots: 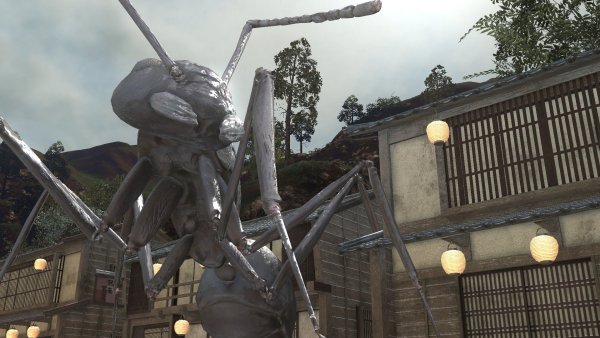 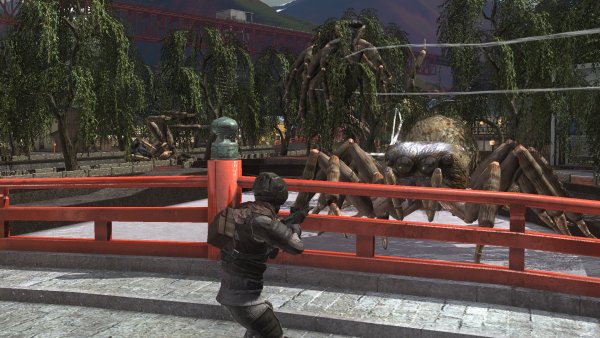 Unlike the aforementioned urban areas, this is a private house (like a hot spring hotel) in a mountainous region. While this is only speculation, there may be non-urban area cities with small populations that were not destroyed and survived.

Finally, please take a look at the following screenshots: 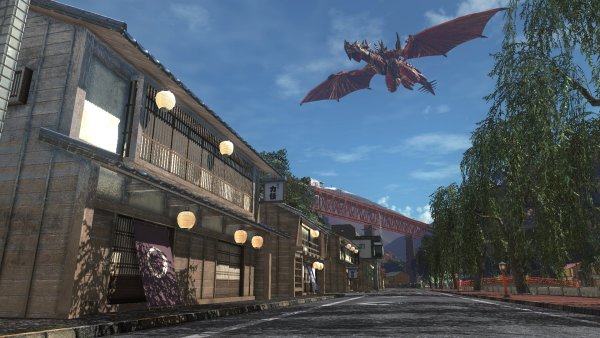 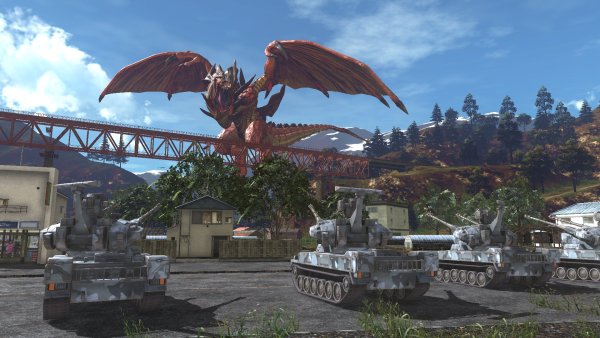 —A mysterious flying creature? Confronted by a yet to be seen battle vehicle. Perhaps there is some fight left in humanity yet…

Creatures that are completely different from the aggressors and aliens have appeared. Perhaps this creature is similar to the super-giant creatures Erginus and Archelus that appeared in Earth Defense Force 5? However, there were no cases of super-giants flying in the sky reported in the previous war.