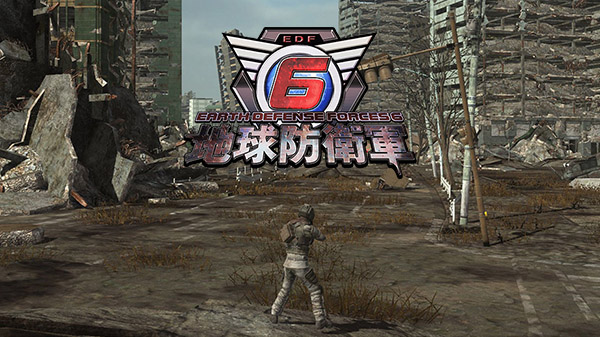 D3 Publisher and developer Sandlot have announced Earth Defense Force 6. It will launch in 2021 in Japan. Platforms were not announced, but PlayStation Blog Japan covered the announcement.

In 2017, Earth Defense Force 5 depicted humanity faced against the invasion of an unknown alien life-form under a new world view. With the motto, “Humanity, oppose your fate,” it became the best selling entry in the series, moving over 500,000 units in Japan.

The ending of Earth Defense Force 5 was enough to forecast a hopeless future. After two years of war, humanity had barely eradicated the unknown invader that suddenly attacked in 2022. And what was left was the harsh reality that 90 percent of the total population was lost, and that the societal system—not to mention civilization—was on the verge of collapse.

The Earth Defense Force and humanity had certainly opposed and won against fate. However, the future ahead was by no means a world full of a hope in terms of recovery…

Can humanity overcome this despair and oppose against fate once again?

Three Years After Victory on a Dying Earth

2024. Humanity won the war against the unknown invaders that lasted two years. The Primers were driven away and silence returned to the Earth. However, the total human population was reduced to 10 percent. Civilization was on the verge of collapse. And those who survived continued to work hard towards recovery…

Three years later, in 2027. Humanity faced another major problem. Many of the aliens (Colonists) that the Primers had deployed into battle were left behind on Earth.

The Colonists formed groups and occupied cities to survive. They have settled on Earth. Humanity and the aliens frequently collided. And through repeated quarrels, both sides faced damages. The two races living on Earth grew tired of each other…

And the remaining threat.

But there was a more serious problem: the invaders continued to breed on Earth.

The invaders that formed nests in the depths of the Earth and its ruins continue to increase. Their numbers have already overwhelmed humanity. Humanity had no choice but to continue fighting so that the invaders would not rule the Earth.

The reconstruction of society and revival of civilization is a very slow process, and each day before that is a struggle to make that day a reality. Humanity continues to fight against the threats that remain…