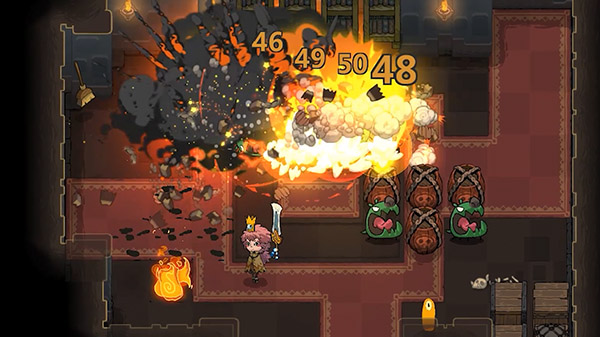 Team17 has announced a partnership with NExT Studios to publish adventure RPG roguelike Crown Trick for Switch and PC via Steam in Q3 2020.

A PlayStation 4 version of Crown Trick was announced by NExT Studios at ChinaJoy 2019, but was not mentioned by Team17. We are awaiting a response from the publisher regarding that version. (Update 9:52 a.m.: A Team17 representative has told Gematsu, “The PlayStation 4 version of the game is still coming, but we’re focusing on bringing the game to Switch and PC first.”)

“As we prepared Crown Trick for its release, we wanted to ensure we found a partner that could maximize its success outside of mainland China,” said NExT Studios producer Stephen Lin in a press release. “With its strong sense of spirit and track record of success, we could not think of any better than Team17. Crown Trick’s imaginatively unique synchronous gameplay, coupled with roguelike action, is a compelling and strategic experience, and we’re looking forward to launching it in the west with the support of Team17.”

Team17 head of publishing Max Everingham added, “Crown Trick is roguelike royalty, a beautifully realized and unique experience thanks to its mix of gameplay features, and fits perfectly with our portfolio of titles. The Nightmare Realm, its traps and monsters, and its procedurally generated maze provide a deadly and compelling environment for strategy and RPG fans alike.”

Set in a procedurally generated maze-like dungeon, Crown Trick is steeped in strategic, synchronous, turn-based gameplay where enemy decisions and actions are only revealed when players make their moves, and features hundreds of weapons, skills, and items on hand to customize and evolve the combat style as the quest progresses.

A finalist in the Indie Prize (Asia) 2019 Awards, Crown Trick is set in the daunting Nightmare Realm, a labyrinthine, underground world filled with monsters and traps. Players will have to master the elements and combine dozens of skills, while planning the best strategy, to overcome deadly enemies that stand still until their plan of attack is executed. As the quest continues, players will have the opportunity to gain access to high-level skills–Familiars–secured from the elite monsters that roam the dungeon, increasing the chances of both success and survival.