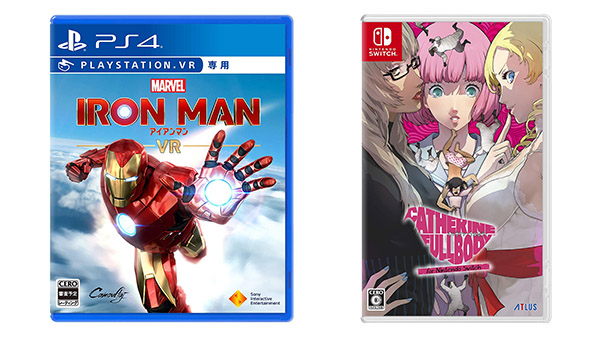 Marvel’s Iron Man VR for PlayStation VR and Catherine: Full Body for Switch are the highlights of this week’s Japanese video game releases.

Developed by Republique studio Camouflaj, Marvel’s Iron Man VR puts players in the role of the Armored Avenger Iron Man in an original adventure. Players can fly through the skies with an arsenal of weapons and face off against enemies in “high stakes, action-packed battles,” as well as upgrade Iron Man’s suit and abilities in Tony Stark’s garage.

As for Catherine: Full Body, while it is already available for PlayStation 4 worldwide and PS Vita in Japan, the Switch version includes the downloadable content from the previously released versions, as well as three additional voice options for Catherine. The story follows Vincent, a bachelor who finds himself in the crossroads of love between longtime girlfriend Katherine, new affair Catherine, and Full Body newcomer Rin.