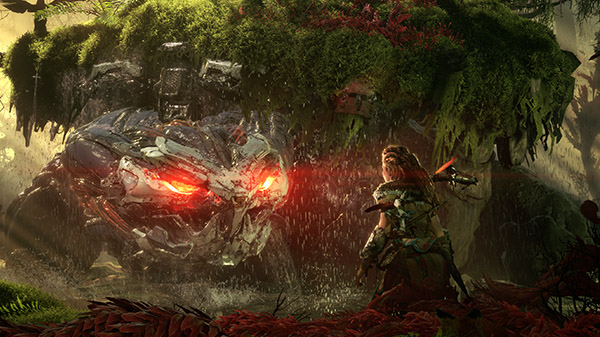 Get the developer diary and transcript below. View the game’s key visual at the gallery.

Hi, my name is Mathijs de Jonge, and I’m the game director on Horizon Forbidden West.

Horizon Forbidden West is an open-world action RPG that takes place in the distant future. And you play as Aloy, a hunter of the Nora tribe, who is on an epic quest to solve mysteries and secrets that will change her life forever.

The title “Forbidden West” actually refers to a mysterious new frontier that stretches from Utah in the U.S.A. all the way to the Pacific Ocean in the west. Ever since the first game, we really wanted to make a world that is so beautiful that you just want to be there. And with the additional power of PlayStation 5, we can make that world even more detailed, and more vibrant, and more immersive. With PlayStation 5’s SSD, there will be virtually no loading screens, so in an open-world game like Horizon Forbidden West, if you open up the map and fast travel from one end to the other, or restart from a checkpoint, it will be super fast. And when you boot up the game, you’re right there in the action.

As Aloy travels into the Forbidden West, she discovers stunning valleys, deserts, and ruined cities full of iconic landmarks. For the sequel, we wanted to go wider and deeper, so the map is a bit bigger, but we also wanted to let players discover what lies hidden beneath the surface of lakes and rivers. The landscapes may be stunning, but danger lurks in every corner in the Forbidden West. It is home to a large variety of machines—Shell Snappers that guard the shores and swamps, Snapmaws that hunt the waterways, and Sunwings that patrol the skies. Players will discover dozens of new machines as they explore the Forbidden West, and each of these machines has to be scanned and studied in order to fight them effectively.

The Forbidden West is also home to new tribes, and some of them are peaceful, while others are hostile. And one of these hostile tribes has discovered the knowledge of how to override machines and use them as beasts of war in combat. One of the bigger machines is the mammoth-like Tremor Tusk. It’s loaded with weapons and heavy-plated armor, and it’s already dangerous when you encounter it in the wilds, but when it’s specially-outfitted by the tribes, it’s even more dangerous.

The Forbidden West harbors an even greater challenge that is a collapsing biosphere. A red blight infects the lands, hoking wildlife and starving animals and tribes, and the weather has spiraled out of control, generating massive supercell storms that flood canyons and fields. Aloy will have to go to great lengths in order to save this world.

As the game is built and designed on mystery, we don’t want to spoil all the surprises today. We have been working very hard in order to create a worthy sequel—one that will hopefully appeal to all the fans, but hopefully also newcomers to the franchise. And we’re aiming to release the game next year—in 2021.