An extended look at "Naughty Dog's largest, most ambitious game." 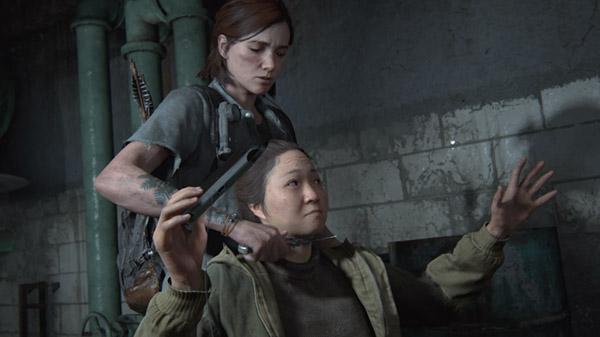 Here is a full transcript of the commentary by Druckmann:

The Last of Us Part II picks up Ellie and Joel’s story several years after the events of the first game. Ellie and Joel have settled in Jackson, Wyoming among a thriving community of survivors. With the threats of the world kept outside the town’s walls, Jackson has been able to find relative peace and even stability. Ellie is now 19, lives on her own, and has been able to forge lasting relationships within the community. However, this peace is short-lived. Jackson and Ellie suffer a violent and traumatizing event, and Ellie sets off back into the treacherous outside world in search of retribution and justice.

Her journey will take her to new parts of the country previously unexplored in The Last of Us. The story spans multiple seasons and climates, from the snow-capped mountains of Jackson to the lush Pacific Northwest. Each introduces a wide range of exterior and interior environments for you to navigate and explore, rendered in meticulous detail and unprecedented scale with the latest iteration of the Naughty Dog Engine. Our goal was to make these environments not only beautiful, but feel as grounded and authentic to the cities they’re based on as possible.

Much of the story unfolds in what remains of Seattle—a massive former quarantine zone. Its locales are incredibly diverse, spanning a dense city center with a skyline of towering high-rises, to the beautiful suburbs and stormy waterfronts that surround it. The city exhibits drastic shifts in architecture elevation and weather, and with Part II we’ve introduced new traversal mechanics that afford greater exploration and ways to navigate threats. Ellie is not only able to climb and jump over gaps, but she can use ropes to scale vertical terrain or swing over obstacles, allowing you to discover new areas, resources, and side narratives. These more open environments also create new, strategic considerations in combat. Whether it’s to get the jump on enemies or bypass them entirely.

The Last of Us Part II features some of the largest environments we’ve ever created. Horseback riding will allow Ellie to quickly cover some of these expansive terrains. Some streets are so flooded that a boat is required to navigate. However, the world of The Last of Us Part II is as lush and inviting as it is deadly. As Ellie uncovers the path to finding those who have wronged her, she must face the many threats of this unknown city. In the wake of the pandemic and the fall of the quarantine zone, Seattle has become a war zone where two warring factions find themselves in an ongoing conflict for territory and resources.

One of these groups is the Washington Liberation Front, otherwise known as the W.L.F. The W.L.F. are a militia group that began as resistance to the military occupation of Seattle and eventually wrestled control the city from them. They are highly trained, organized, and well-equipped with weapons they stole from the army. They occupy much of the city, imprisoning or killing trespassers on sight.

On the other side of this bloody conflict is a group of religious zealots called the Seraphites or Scars, defined by the self-inflicted deep cuts that they bear across their faces. Like the W.L.F., they are deeply tribalistic and territorial. They’re known for being stealthy using overgrowth as cover and they use more silent weapons like bows and arrows.

But beyond this conflict among survivors, the threat that originally brought the world to its knees is very much present. Every human is in danger of falling victim to the Infected. There are the recently Infected Runners who are more numerous and aggressive in this game. The blind, but extremely deadly Clickers. And the Stalkers, who sneak and hide until they’re ready to attack, surprising the victims with extreme agility and brutal violence.

The Last of Us Part II introduces new stages of Infected such as the Shamblers—large, heavily armored enemies that are covered in pustules. Upon getting close to you, they expel a corrosive spore cloud the burns its victims. But our most terrifying and lethal new forms of Infected will have to wait until you play the game for yourselves. Overcoming these threats will require careful consideration of how you approach every combat encounter and how you leverage Ellie’s unique skills, equipment, and environment to your advantage.

The W.L.F. patrols the streets of Seattle with guard dogs, which are capable of detecting and following you even while uncovered. They can pick up your scent and alert their handlers to your presence. Listen Mode will reveal your scent trail, so keep moving and cause distractions to avoid detection.

25 years after the pandemic began, the world has completely overgrown. Use tall grass to hide from enemies and go prone to stay out of sight. However, this form of analogue stealth means you’re never fully hidden. If enemies get close enough, they can discover you even in grass. When Ellie is overwhelmed, running away is a viable option. You can also break glass or crawl through tight spaces to find new paths or areas to evade, or take on your enemies. In any given combat situation, you can flee an encounter and re-establish stealth to regain the advantage. If you absolutely have to fight your way out, there are a variety of tools at your disposal.

Ellie is more agile than most of her enemies. She can sprint and quickly dodge incoming attacks. Learning how opponents attack with different weapons and mastering the timing of your dodges will prevent you from taking damage and create opportunities to counter-attack. You can use throwable items or well-placed shots to stun enemies before dealing a killing blow. Or use them as a shield to protect yourself or buy some time to figure out your next move.

Ellie isn’t always alone on her journey. Allies will take part in helping you navigate the environments, spot enemies, and meaningfully help you in combat encounters. Between the human survivors and the roaming Infected, there will be times where multiple threats are present, creating new strategic considerations and opportunities. You can choose whether to attack these opponents separately and directly, or find ways to pit them against each other. Flee as they fight or wait until their numbers have thinned out and engage with whoever’s left.

Our goal is to create unparalleled attention, coupled with deep systems that give you greater control and influence over your journey. As you play you’ll be able to invest in the broad collection of crafting items, weapons, and player upgrades through training manuals scattered throughout the environment and by scavenging for ingredients. These skills and upgrade manuals cater to a variety of play styles, and the choices you make will create your own distinct experience. We also wanted to extend that agency and personalization to your weapons through our new workbench system. Scavenge for parts to modify and improve your weapon’s performance and attributes, all of which are visualized and become part of your character.

Survival will also require using the parts and ingredients that you’ll find in the environment, which can be crafted into a wide range of defensive and offensive items like proximity mines, explosive arrows, pistol suppressors, and more. All of these gameplay systems are meant to immerse you in the world and make you feel in lockstep with Ellie’s emotional journey.

As we’ve said before this is Naughty Dog’s largest, most ambitious game. It may seem like we covered a lot, but we only scratched the surface of what it’s like to play The Last of Us Part II. We can’t wait for you to experience it all for yourself on June 19.

The Last of Us Part II is due out for PlayStation 4 on June 19 worldwide.