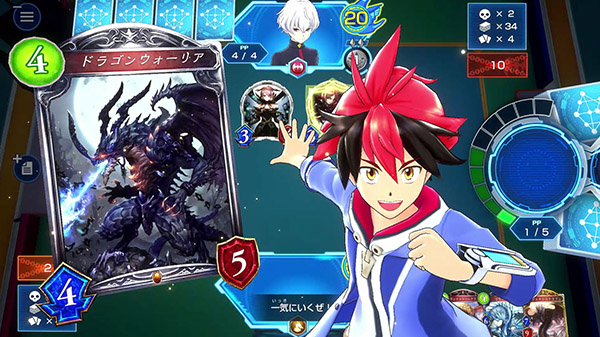 Shadowverse: Champion’s Battle will launch physically and digitally for Switch on November 5 in Japan for 5,980 yen, Cygames announced.

All copies of the game will include a “Shadowverse: Champion’s Battle Battle Set” serial code for the main Shadowverse game, which is only compatible with the PC (Steam), Android, and DMM Games versions of the title.

While a western release has yet to be announced, Cygames recently trademarked an English logo for Shadowverse: Champion’s Battle in the United States and Europe.

Shadowverse: Champion’s Battle is a card battle RPG set in the world of the Shadowverse TV anime. Players will become the protagonist in an original story set at Tensei Academy with familiar characters. The game features special summoning scenes, game-original cards, and more that allows players to enjoy heated battles against in-game rivals and friends. It is a single-player game with support for two-player local battles.

On his first day at Tensei Academy, the transfer student protagonist meets Hiiro Ryuugasaki and learns about Shadowverse and the school’s Shadow Club.

Become the protagonist and go on an adventure in the world of the Shadowverse anime. An original story will unfold with familiar characters at Tensei Academy.

Watch the first trailer below. View a set of screenshots and artwork at the gallery.

visit gallery »
The Witcher series sales top 50 million Previous post
Re:ZERO - Starting Life in Another World: The Prophecy of the Throne announced for PS4, Switch, and PC Next post