A massive week of new releases with over 30 titles. 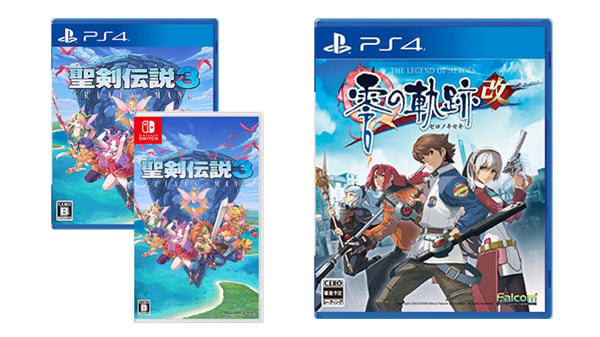 Trials of Mana and the PlayStation 4 version of The Legend of Heroes: Zero no Kiseki are the highlights of this week’s Japanese video game releases.

A remake of the 1995-released Super Nintendo game Seiken Densetsu 3, Trials of Mana is a fully modernized action RPG with revamped 3D graphics, character voice-overs, a remastered soundtrack, a new episode available after the ending, an ability system, and a new class that reconstructs the character leveling system. Its six protagonists have overlapping stories and their fates change depending on who you choose as your main character and two companions. Read more about the game here, here, and here.

The PlayStation 4 version of The Legend of Heroes: Zero no Kiseki, which was originally released for PSP in September 2010, adds a fully-voiced main story, a high-speed skip mode, 60 frames per second support, high image and sound quality, the ability to skip battle cut-in scenes, and various user interface updates. Read more about the game here and here.