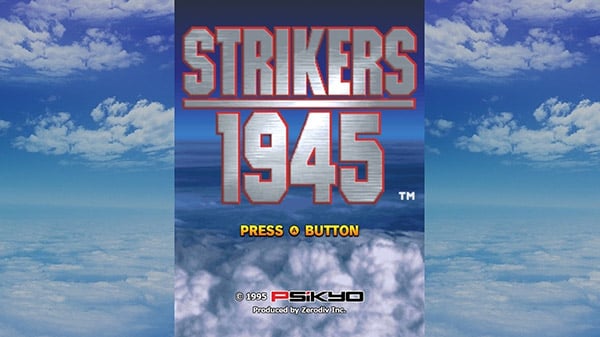 City Connection will release the 1996-released, Psikyo-developed shoot ’em up Strikers 1945 for PC via Steam on April 30 for 990 yen, the company announced. It will support both English and Japanese language options.

Following Strikers 1945, City Connection plans to release the following other Psikyo shoot ’em up titles for PC via Steam:

Release dates and release order are still to be determined.

Here is an overview of Strikers 1945, via its Steam page:

This is the most popular and famous title from the Psikyo shooter series!

Strikers 1945 is a vertical-scrolling shooter game that first appeared in arcades in 1995.

Watch Battleships and tanks transform into futuristic mechs. The challenging boss battles will surely test out your skills. After you play this game, you’ll know why the Psikyo Bullets are legendary.

Let’s go, Strikers! Board a fighter plane, fly across the sea, across the sky, and beyond. Stop this secret organization from taking over the world!

In addition, now we have online rankings! Become the worlds to Striker!

LordTerrantos ⋅ Nioh director: No current plans for Nioh 3, but hopes to return to series in the future; Ninja Gaiden news coming soon ⋅ 5 minutes ago

_ Gustavo ⋅ The Medium ‘What Does a Medium Do?’ trailer ⋅ 8 minutes ago

Overdone ⋅ The Medium ‘What Does a Medium Do?’ trailer ⋅ 12 minutes ago