First released for Switch in June 2019. 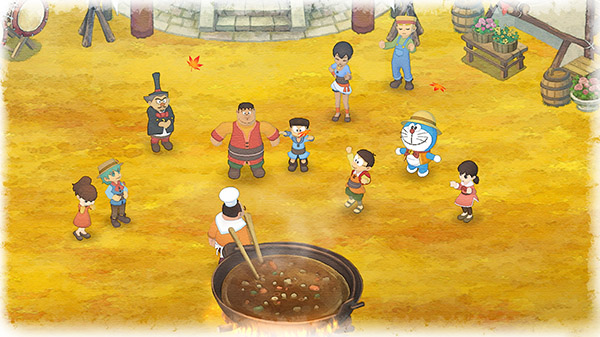 Doraemon Story of Seasons is coming to PlayStation 4 on July 30 in Japan for 6,100 yen, the latest issue of Weekly Famitsu reveals.

The Bandai Namco-published Doraemon and Story of Seasons crossover title first launched for Switch in June 2019 in Japan, followed by Switch and PC via Steam worldwide in October 2019.

In an interview with Weekly Famitsu, Bandai Namco producer Kenji Nakajima said since there were many users who wanted to play Doraemon Story of Seasons on PlayStation 4, development on a port began following the worldwide release. Nakajima also said that Bandai Namco is considering free updates for all platforms.

Marvelous director Hikaru Nakano added that the company is “currently preparing new developments following Story of Seasons: Friends of Mineral Town.” And development partner Brownies’ Shouhei Yamashita said, “While there are some hurdles in porting to another platform, we have overcome the big ones.”

Doraemon meets Story of Seasons in this new, fresh take on farming!

The setting is Natura, and at the center of this land is the mystical Big Tree. Doraemon and friends will each take on a role to help out around town!

The theme of this experience is creating bonds with the town residents, and while doing so, enjoying the heart-warming interactions through each character and the part they play in the story.

But building a farm and raising horses and cattle like in other Story of Seasons games isn’t the only thing to do. Explore the town of Natura, go on adventures, catch bugs and much much more! Fans of the Doraemon series will also be happy to know that Doraemon’s gadgets can be used to assist you in your new, everyday life!

Enjoy the nostalgia of Doraemon and Story of Seasons while helping Noby live his farm life in this unique, lovable land!