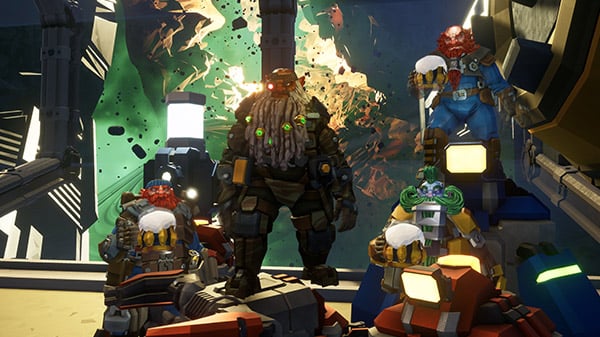 Space mining cooperative first-person shooter Deep Rock Galactic will leave Early Access and launch for Xbox One via the Microsoft Store and PC via Steam and the Microsoft Store on May 13 for $29.99 / €29.99 / £24.99, Coffee Stain Publishing and developer Ghost Ship Games announced.

Ghost Ship Games ran a competition for fans to make their own launch trailers for Deep Rock Galactic. With over 200 entries, the developer has selected the top 40 to compete for the top prizes and will showcase new fan trailers each day on the Deep Rock Galactic social channels, concluding with the winner on May 12.

Deep Rock Galactic first launched in Early Access in February 2018 and has since surpassed one million sales. It has been regularly updated with new features and content, including “enemies, weapons, missions, perks, assignments, deep dives, through to vanity items, beard physics, dwarven shouts, and a multitude of beers in the Abyss Bar.”

“When we started developing Deep Rock Galactic four years ago, none of us at Ghost Ship Games had imagined the game as it is today,” said Ghost Ship Games CEO Soren Lundgaard in a press release. “While many of the core features have evolved and works as we hoped, there are also entire sections of the game that we didn’t dream of, and that is largely due to our community. Our focus has always been co-op first so to create something that truly requires teamwork meant we needed to team up with the community. We want to thank our players for their support and feedback after four years we’re incredibly excited to officially launch.”

Coffee Stain CEO and co-founder Anton Westbergh added, “Deep Rock Galactic was one of the first games we signed. The journey from the closed alpha through to launch has been incredible and it’s been fantastic to see such a passionate community support the game’s development. We’re thrilled to be the publishing partner for Ghost Ship Games, a studio with a unique focus and strategy for co-op combined with creativity and a real community-first approach.”

Here is an overview of the game, via Coffee Stain Publishing:

Cris Tales - 22 minutes of gameplay Previous post
Dungeon Defenders: Awakened launches May 28 for PC, Q3 2020 for Switch, and Q4 2020 for PS4 and Xbox One Next post