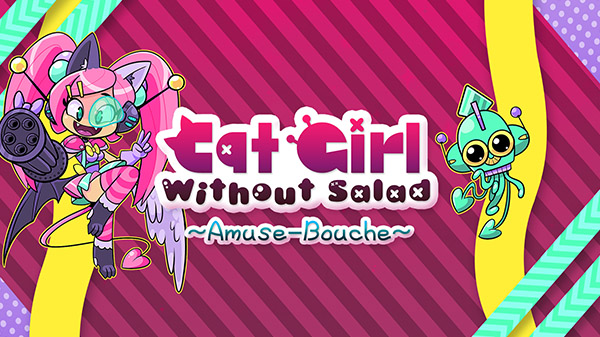 Publisher WayForward and developer Humble Bundle have released Cat Girl Without Salad: Amuse-Bouche, first launched for PC in June 2016 as a Humble Bundle Exclusive, for Switch via the Nintendo eShop for $7.99.

WayForward is pleased to announce that the ultimate April Fools’ joke is once again ridiculous reality with today’s surprise launch of Cat Girl Without Salad: Amuse-Bouche on Nintendo Switch. Originally shown in 2013 as a hyperbolic, over-the-top, genre-blending April Fool’s gag, the game was later brought to life on PC. Now, the journey of Cat Girl Without Salad: Amuse-Bouche comes full circle as it makes its console debut today at the price of $7.99.

Described in the initial April Fools’ joke as a chaotic, category-defying ubergame that could be all things to all players, Cat Girl Without Salad: Amuse-Bouche is a side-scrolling 2D shoot-’em-up featuring weapon power-ups inspired by various game genres—including puzzle, sports, platformer, rhythm, and RPG. Wielding this unconventional arsenal is Kebako, an intergalactic cat-eared bounty hunter, who’s accompanied by her faithful companion, Squiddie, as she flies and blasts her way through wave after wave of quirky enemies. The absurd, fully voiced story unfolds alongside the action, which culminates in epic, multiphase boss battles against the galaxy’s most implausible criminals, such as pyromaniac rockstar Gunnar Crossbones, insane cook Chefinoff, and vengeful Uramiko (AKA Cat Grill)!

Rated E10+, Cat Girl Without Salad: Amuse-Bouche is available now as a digital download via the Nintendo Switch eShop.