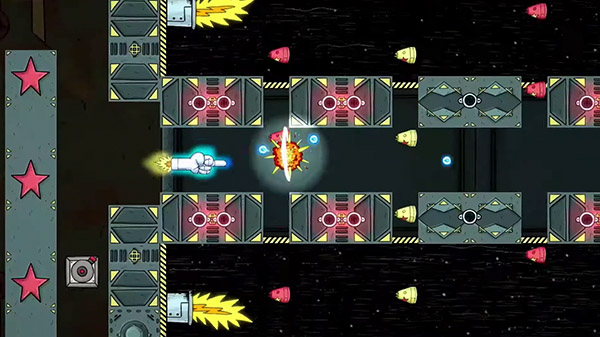 The PlayStation 4 and Xbox One versions of shoot ’em up Freedom Finger will launch alongside a free “Rhymesayers Update” for the currently available Switch and PC (Steam) versions on March 24, developer Wide Right Interactive announced.

The “Rhymesayers Update,” which is also included in the PlayStation 4 and Xbox One versions, adds new levels featuring original music by underground hip-hop artist Aesop Rock, as well as “a wide variety” of enhancements, bug fixes, and accessibility options.

Classic shoot ’em up gameplay blended with melee combat! You’re flying a ship shaped like a giant hand, so use it! Punch, grab, and shoot enemies to smithereens! The unique grab attack allows you to capture enemies and use their guns as power-ups!

Fight your way through 40 handcrafted levels, spread out over 13 worlds! Each world features new enemies, power-ups, and challenges!

A wide selection of difficulty settings. Whether you want to chill and enjoy the story or crank the difficulty for a butt-blasting ridiculous challenge, we’ve got you covered!

A highly satirical storyline that explores hot-button topics such as communism, US foreign policy, sriracha sauce, and crafting in video games.