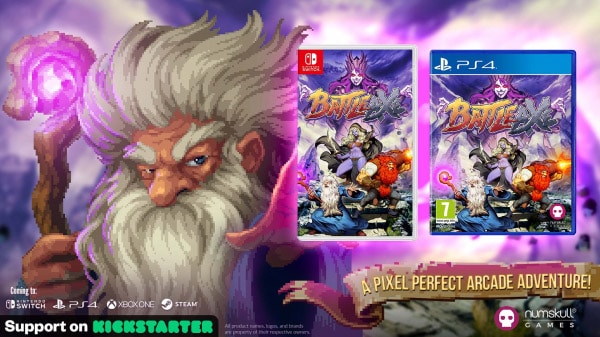 Numskull Games will publish pixel art arcade adventure game Battle Axe worldwide for PlayStation 4, Xbox One, Switch, PC, Mac, and Linux, the company announced. The PlayStation 4 and Switch versions will be released both physically and digitally.

A Kickstarter campaign for Battle Axe first launched in late January, and with seven days still remaining, has exceeded its $51,648 funding goal at $63,384 in funding as of press time.

“Numskull Games brought a real passion to the table when they saw our plans for Battle Axe, with the team there personally invested in this sort of classic-style game,” said Battle Axe lead designer Henk Nieborg in a press release. “We recognized they were the right publishing partner to put Battle Axe in people’s hands and we’re especially excited with the opportunity to see our games at retail.”

Here is an overview of the game, via Numskull Games:

For as long as you and your people can remember, your homeland of Mercia has been held in the tyrannical grip of “Etheldred”; a despotic sorceress who resides in a seemingly impenetrable tower in the distant icy wastelands to the north. Every seven years she sends her armies south to handpick inhabitants from each township who will be subjected to a life of slavery, and they are never heard from again.

A call is sent out to champions across the land pleading with them to put a end to her rule. An elf, a wizard and a marauder answer the call. Join this band of heroes on their quest the vanquish evil from the land and defeat Etheldred once and for all!