From the pixel artist behind Shakedown: Hawaii, Heart Forth Alicia, and more. 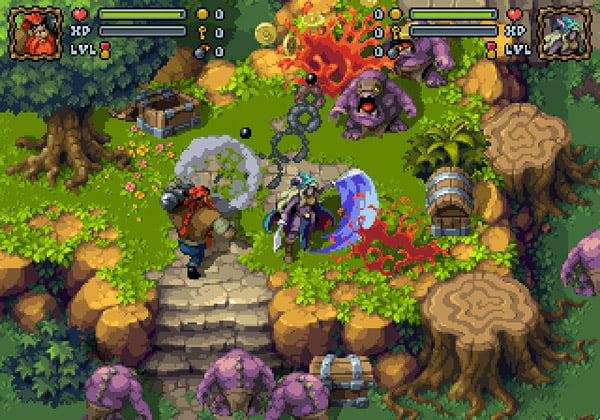 Pixel artist Henk Nieborg, whose previous works include Shakedown: Hawaii, Heart Forth Alicia, the Shantae series, and more, has launched a Kickstarter campaign for Battle Axe, a top-down arcade adventure game inspired by the 1985-released hack and slash arcade game Gauntlet. It is planned for release on PlayStation 4, Xbox One, Switch, PC, Mac, and Linux in January 2021.

Here is an overview of the game, via its Kickstarter campaign:

Battle Axe is a top-down arcade adventure game which is largely inspired by Ed Logg’s 1985 classic, Gauntlet, but also draws from the likes of Golden Axe, Dungeons & Dragons: Shadow Over Mystara, and Knights of the Round.

Battle Axe can be played solo or in local co-op by two people, with players choosing their preferred hero before embarking on their quest. Each hero has a projectile attack to tackle the enemy from afar, as well as a short-range attack, special abilities to give them a momentary advantage, and they can also can pickup items which have a variety of effects.

Although Battle Axe’s gameplay will feel instantly familiar to fans of hack n’ slash games, I am aiming to revitalize the genre with new gameplay elements, improved controls, amazing pixel art from myself (am I allowed to say that?), and a superb soundtrack by legendary video game music composer Manami Matsumae, who previously composed the soundtracks for Mega Man, Final Fight, Area 88, Mercs, Magic Sword, Shovel Knight, and many other classics!

For as long as you and your people can remember, your homeland of Mercia has been held in the tyrannical grip of “Etheldred”; a despotic sorceress who resides in a seemingly impenetrable tower in the distant icy wastelands to the north. Every seven years she sends her armies south to handpick inhabitants from each township who will be subjected to a life of slavery, and they are never heard from again. Some months ago a party of mercenaries was dispatched to attempt to put a stop to Etheldred and her cohorts, but none of them returned…

Etheldred has also placed dozens of “generators” all over the land to help her maintain control and suppress its inhabitants—these generators become active when they detect a threat, constantly spawning monsters which will attack on sight. Not only this, but each territory within her reach is also overseen by a fearsome guardian, making the path to her tower fraught with danger.

With Etheldred’s next raid looming on the horizon, and with the population becoming increasingly desperate, a call is sent out to champions across the land pleading with them to put a stop to her plans. Whether your heroes meet the same fate as their predecessors or returns triumphant is down to you…

Before you set out on your adventure you must first select your hero, each of which has their own traits, weaponry and abilities, and they will all take some time to truly master.

Your chosen hero is able to move and attack in eight directions, and must battle their way through hordes of enemies before confronting the region’s boss. All heroes not only have a close-range melee attack but also a long-range projectile attack should they want to engage the enemy from a distance.

Vanquished enemies will reward their assailant with experience points relative to the enemy’s prowess in combat—crossing certain experience thresholds (e.g. 10,000, 20,000, 40,000, etc.) will result in the hero reaching a new experience level, which in turn means that they will become more durable in combat. Particularly skillful players will be able to boost their score by taking advantage of the combo system, where killing enemies in rapid succession will result in them dropping gems of increasing value (in place of coins) relative to the length of the combo.

Slain enemies will also occasionally relinquish gold and even items too. Gold can be accumulated and exchanged for items and upgrades if you happen to come across the travelling merchant, Ælfwen. Whilst chests might yield riches, potions and other artefacts, they might also be booby-trapped, inflicting damage or ailments upon their unfortunate victim. Secret doors on the other hand can reveal rooms containing treasure, alternative routes through the level, or even surprise encounters.

Each hero also has their own special ability (i.e. rolling, dashing, and teleporting), which will open up more possibilities and strategies on the battlefield. Heroes can also use items at will, and equip artefacts which can help them in combat. Battle Axe will contain some light RPG elements, allowing heroes to improve their stats and equipment in exchange for gold coins collected along the way.

Scattered throughout the land you will discover fellow villagers who have been enchanted and snared by Etheldred’s magic—it is your duty to rescue all of the villagers in each area, with each one rewarding the player with points or sometimes an item.

Between areas the heroes will make camp and spend some time recuperating before heading onto the next stage of their journey. Each hero’s health meter will be completely replenished and the party may also be visited by Ælfwen, who never misses an opportunity to sell her goods.

Watch the Kickstarter launch trailer below.

Dungeon Defenders: Awakened launches for PC via Steam Early Access on February 21 Previous post
RPG platformer Underhero coming to PS4 on February 11, Switch on February 13, and Xbox One on February 14 Next post