Another trio of character clips. 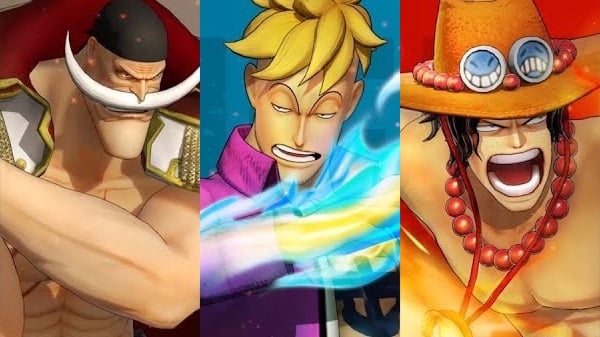 Captain of the Whitebeard Pirates. His real name is Edward Newgate. He wields the power of the Tremor-Tremor Fruit, the abilities of which are considered powerful enough to destroy the world. When the public execution of Ace by Navy HQ was announced, he led a group of pirates attacking Marineford and causing the Paramount War.

First division commander of the Whitebeard Pirates, known as “Marco the Phoenix.” One of the old crew members. He is a Mythical Zoan user, which is said to be rarer than users of the Logia-type Devil Fruits. This endows him with beast-type powers and also the ability to fly by transforming his arms ibto wings, as well as use the Color of Arms Haki.

Luffy and Sabo’s brother, son of the King of the Pirates, Roger; AKA “Fire Fist Ace.” He once led his own pirates, but was defeated by Whitebeard and became the second division commander for Whitebeard’s Pirates. He ate the Flame-Flame Fruit, and has complete control over fire. He chased down his former subordinate, Blackbeard, for the crime of killing a crewmate, but was defeated and handed over to the Navy. They decided to execute him in public, triggering the Paramount War.

Ectomime ⋅ Hades rated for PS4 in Korea ⋅ 2 minutes ago