A Warlord of the Sea and the Admiral of Navy HQ. 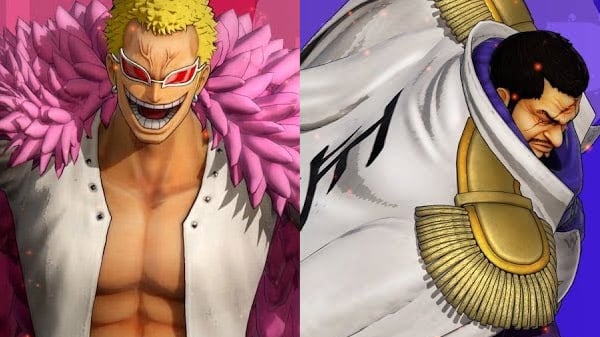 A Warlord of the Sea and king of Dressrosa. His real name is Don Quixote Doflamingo AKA The Heavenly Demon, or “Joker” in the underworld. He produces artificial Devil Fruits called “SMILEs.” He wields the power of the String-String Fruit and strings he uses can manipulate humans, slice through any object, and even loop around clouds to lift him. He is evil and brutish, but calls his officers “family” and treats them with kindness.

Admiral of Navy HQ. His real name is Issho. He is a blind swordsman who uses a cane for a weapon. His specialty is being able to draw his sword with the opposite hand.He is faithful to the mission, but acts on his own sense of justice, and believes that the Seven Warlords of the Sea should be abolished. He is a Devil Fruit power-user who manipulates gravity at will. He can make objects float in the air, and even drop meteorites.