Three Warlords of the Sea and the queen of the Kamabakka Queendom. 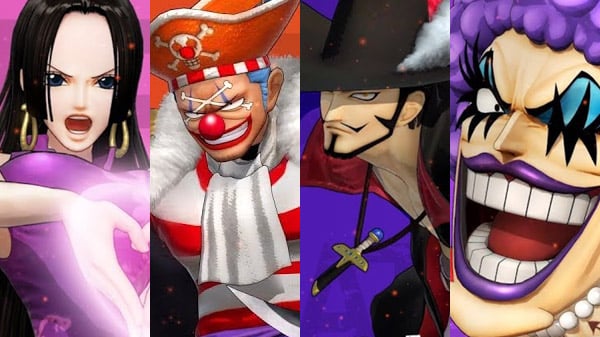 One of the Seven Warlords of the Sea. Empress of “the Island of Women,” Amazon Lily, and captain of the Kuja Pirates AKA the “Pirate Empress”. A woman of indescribable beauty, she always looks down on and acts superior to others. She ate the Love-Love Fruit, and can turn those with impure hearts into stone. Having fallen for the wild and unpredictable Luffy, she uses her position as one of the Warlords to help him in various ways.

One of the Seven Warlords of the Sea, also known as “The Genius Jester”, he leads an organization offering pirates for hire. When he was an apprentice pirate, he crewed the ship of Roger, the King of the Pirates, along with Shanks. When that history came out, after his escape from Impel Down, he used his cunning to expand his influence, quickly growing his legend into that of a mighty pirate. He is very sensitive about his nose.

One of the Seven Warlords of the Sea, also known as “Hawk-Eye Mihawk.” The man who stands above all other swordsmen in the world. Capable of cutting even a massive ship in two with a single stroke of his sword. In the Grand Line, he destroyed the pirate armada of Krieg’s crew, all 50 ships, single-handedly. He says that his reason for doing so was to “pass the time,” showing how difficult it is to read his personality.

A key leader of the Revolutionary Army and queen of the Kamabakka Queendom on Peachy Island. Also known as “Iva.” From his history of saving many countries and people, he is also known as the “Miracle Person.” A power user who ate the Horm-Horm Fruit, he can control people’s hormones and alter them from the inside. He is also a master of New Kama Karate.