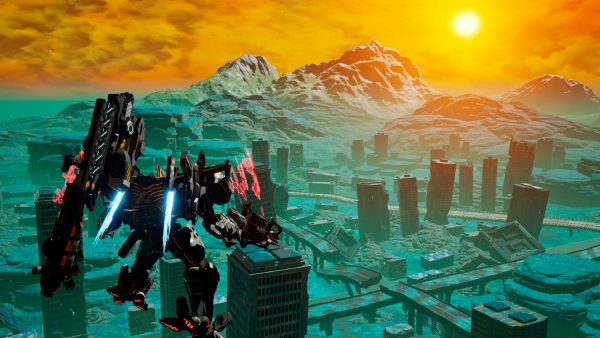 Daemon X Machina, which first launched for Switch in September 2019, is coming to PC via Steam on February 13, publisher XSEED Games announced. It is currently available for pre-purchase with a 20 percent discount off its standard price of $59.99 / €59.99 / £49.99, which will be reduced to a 10 percent-off discount during launch week.

All copies purchased during the pre-purchase period or during the first month of release will include exclusive bonuses such as an Arsenal mech, character Outer suits, and a weapons set. The Prototype Arsenal Set, which contains the Prototype Arsenal mech and Prototype Plugin outfit, will be available for purchase at a later date. The Metallic Equipment set, which contains five unique weapons and the Metallic Plugsuit outfit, will never be sold separately.

The PC version of Daemon X Machina adds visual upgrades, customization options, and support for gamepads as well as keyboard and mouse. Other than some licensed downloadable content, the PC release will ship with all the content updates from the Switch version, including new Arsenal gear, cosmetic options, Colossal Immortal battles, and the co-op Exploration Mission mode.

“Welcome to your battlefield.”

You are an Outer, a new breed of human being that appeared in the aftermath of the Moonfall calamity. As a mercenary for the Orbital organization, you are on the front line of a desperate war for humanity’s survival against the Immortals—corrupted AIs that have rebelled against their human creators. Piloting a fully customizable mech known as an Arsenal, you must team up with mercenaries like yourself and complete missions to defeat the Immortals once and for all. But be careful—in a war fought by mercenaries, today’s allies can become tomorrow’s enemies.

Watch the PC announcement trailer below. View the first screenshots at the gallery.