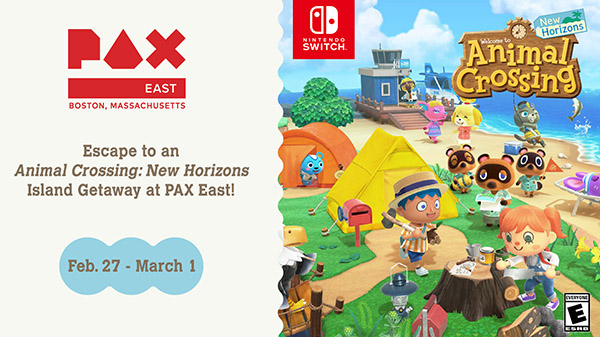 Animal Crossing: New Horizons will be playable by the public for the first time at PAX East 2020, which runs from March 27 to February 1 at the Boston Convention Center, Nintendo announced. Visitors who play the demo will receive a special Tom Nook-themed tote bag (while supplies last).

Nintendo will also host a guided showcase of Animal Crossing: New Horizons on its demo stage, which will give visitors a tour of the game’s single-player mode.

“We hope fans are eager to visit the deserted island paradise of Animal Crossing: New Horizons, so this year at PAX East we’re bringing the island with us and inviting all attendees to play the game for the first time,” said Nintendo of America senior vice president of sales and marketing Nick Chavez in a press release. “We’re looking forward to meeting with players and truly bringing our shared love of games to life.”

The currently available Pokemon Sword and Pokemon Shield will also be playable at the event. Visitors who play the demo will receive a special postcard booklet featuring images from the Galar region (while supplies last). Visitors who bring their own Switch unit and copies of the game to team up with others and potentially encounter special Pokemon in Max Raid Battles will receive a special Pokemon pin (while supplies last).

Luigi’s Mansion 3 and The Strechers, both of which are also currently available, will also be playable at the Nintendo booth.

PAX East 2020 attendees will have the opportunity to reserve a free Warp Pipe Pass to gain priority access in line to the Animal Crossing: New Horizons demo via the Nintendo Events website starting February 25 at 2:00 p.m. PT / 5:00 p.m. ET.

Animal Crossing: New Horizons is due out for Switch on March 20.