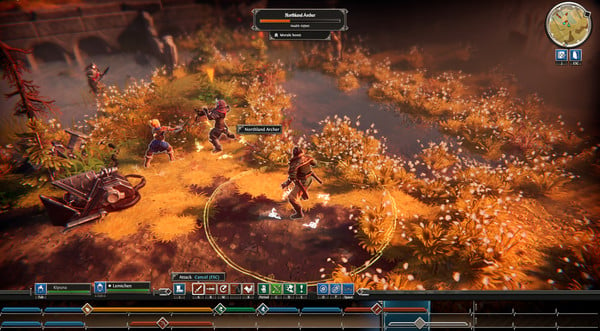 PlayStation 4 and Xbox One versions are also planned for release, but have yet to receive a release date.

Iron Danger transports players to a war-torn world inspired by a fusion of nordic mythology, steampunk and tech noir. In order to save the city of Kalevala, you’ll have to find new companions, upgrade their abilities and understand that the river of time does not simply flow in one direction.

When an army of Northlanders invade her village, Iron Danger’s protagonist Kipuna is mortally wounded – saved only by a mysterious crystal creature that grants her the ability to rewind time. With her new-found powers, Kipuna can manipulate the fourth dimension and turn back time up to five seconds in order to change the future. Players can dodge or block attacks that were sure to hit them, strategically adjust their position on the battlefield, choose and time attacks befitting the situation or heal themselves. This gives traditional tactical combat a puzzle-like element, as players can continuously test new approaches and synchronize character actions for the perfect outcome.

AsukaThorn ⋅ The Legend of Heroes: Hajimari no Kiseki details Sinners story and characters ⋅ 17 minutes ago