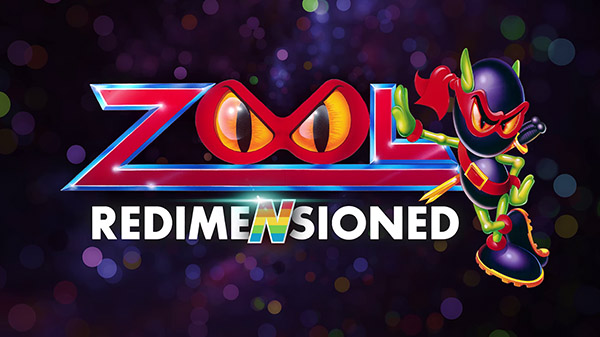 Publisher Secret Mode and developer Sumo Digital Academy have announced Zool Redimensioned, a rebuilt version of the 1992 Amiga classic action platformer. It will launch for PC via Steam in August.

The Ninja of the Nth Dimension is back!

Originally released by Gremlin Graphics in 1992 on the Amiga to critical acclaim, iconic gaming mascot Zool returns in Zool Redimensioned!

This brand-new reimagining of the classic action platforming adventure has been rebuilt from the ground up for modern audiences. Help Zool jump, spin and shoot his way across eight alien worlds, taking down menacing bosses and saving the universe from the nefarious influence of Krool.

Zool‘s old school platforming action will challenge the most hardcore gamers, with modern enhancements that bring the game into the 21st century. Beat your speed run times, discover secrets hidden across every level, or go back in time and play the original classic game. Re-live the legend of the ninja that started it all!

Zool Redimensioned has been rebuilt from scratch by the Sumo Digital Academy, a talent development program focused on creating new pathways into the games industry. With guidance from the developers of the 1992 original at Gremlin Graphics, we’ve retained the spirit that makes Zool a cult classic, while adding mechanics we’ve loved from the past 29 years of fantastic platforming games. The result is Zool Redimensioned, a game that transcends time and space—don’t miss out on this classic retro adventure!