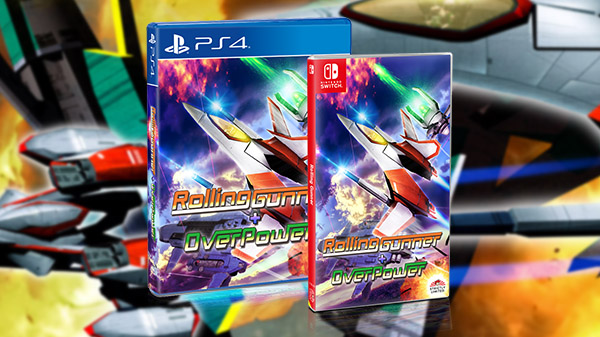 ININ Games will release side-scrolling shoot ’em up Rolling Gunner + Over Power for PlayStation 4 via the PlayStation Store later in 2021, and Strictly Limited Games will open pre-orders for limited print physical editions for both PlayStation 4 and Switch on July 17 at 3:00 p.m. PT / 6:00 p.m. ET, the companies announced.

Developed by Mebius, Rolling Gunner first launched for Switch via the Nintendo eShop in June 2019. The downloadable content “Over Power” followed in January 2021.

In a not so distant future, in the year 2034, the element Busterium will revolutionize the whole world. Using the new element as a power source, Buster Engines— alongside a central control computer, called BAC – were developed and replaced the old technologies in many areas.

Things went well for a long time, until BAC suddenly turns against humanity and uses the power and machines he has accumulated over time to take control of the Earth. After BAC’s attack and the subsequent chaos on Earth, the population was reduced by half. To save the remaining humans and the planet Earth, BAC must be stopped!

Fortunately, from the beginning there was a group who foresaw the danger from such a powerful AI. Secretly, they have been working on a weapon to defeat BAC—the Rolling Gun.

And now, the operation to destroy BAC begins. Being the last chance for the planet, players have to battle their way through a variety of opponents and finally face the out of control AI.

Dr. Gulabjamuns ⋅ Funcom acquires Cabinet Group, including Conan the Barbarian and dozens of other IP ⋅ 36 minutes ago

OxyTech ⋅ Funcom acquires Cabinet Group, including Conan the Barbarian and dozens of other IP ⋅ 51 minutes ago
Latest Open Forum