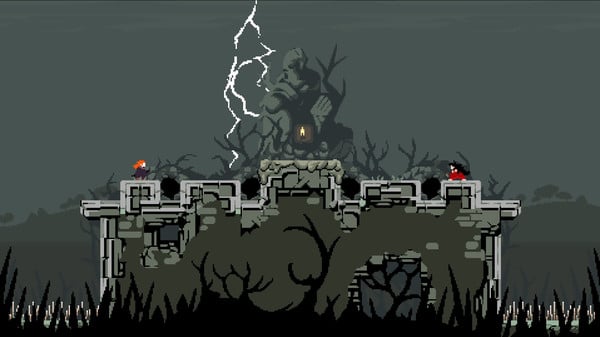 Samurai Gunn 2 is now available in Early Access for PC via Steam, publishers Scrambler and Peow Studio, and the game’s collective of developers announced. It launched a 10 percent-off launch discount price of $13.49, which will change to $14.99 starting July 27.

The Early Access version will ships all three modes (Adventure, Versus, and Comic) implemented with online and local multiplayer, eight playable characters, nine Versus levels, the first quarter of Adventure (21 levels), and the first of six Comic chapters.

Don’t blink! Samurai Gunn 2 is a fast-paced action game that’s easy to pick up but hard to master. Each samurai is armed with a Sword and Gunn, loaded with only three Bullets. By ‘swallowing’ a Bullet, you can even Dash! Fly unscathed past your opponents, just don’t Dash into a Bullet head on! Like the original, experience the thrill of one-hit Versus.

Every samurai is unique in how they feel and play. Run up walls, turn invisible, shoot explosive bullets, the list goes on! Discover new techniques and play styles with an ever-expanding roster. Featuring Minit and Ana from Spelunky! Who knows who will show up next?

And… at long last, the Forbidden Forest has been found. Venture alone or with the help of friends in the new Adventure mode, a unique departure from Versus. Face off against the Cursed Tengu as you explore an overworld hidden with secrets. Are you up to the challenge? On the couch or online.