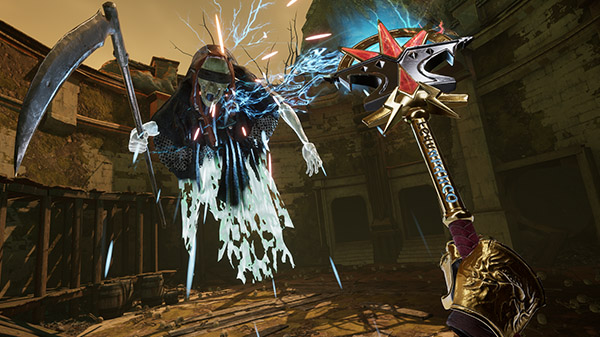 Carbon Studio has released the debut gameplay trailer and new screenshots for Warhammer Age of Sigmar: Tempestfall, its upcoming Warhammer adventure RPG due out for PC virtual reality platforms via Steam and Oculus Quest this summer. Closed beta sign-ups are available now via Discord until June 10.

Here is an overview of the game, via Carbon Studio:

Set in the Age of Sigmar universe, Tempestfall‘s campaign begins following the devastating event known as the Necroquake in the Realm of Death, known as Shyish. This massive explosion of dark magic has triggered the Nighthaunt forces to rise up all across the Mortal Realms. In response a retinue of Stormcast Eternals, the embodiment of Sigmar’s wrath made manifest, and gifted with superhuman speed, strength and endurance has been especially assembled. The quest to lead this retinue and investigate this new threat to the Mortal Realms, and the dangerous task of a hands-on investigation in Shyish, falls to you, Lord-Arcanum Castor Stormscryer.

From cities to catacombs, swamps to prisons, the farther into the world of Tempestfall you go, the more dangerous it becomes. Wield powerful storm magic and dare to walk the realm of Death. You will rise to meet the challenges, Sigmar demands it.

We designed a combat system that incorporates both challenging melee combat and immersive gesture-based spellcasting using the iconic weapons of a Lord-Arcanum. As you traverse across the treacherous Realm of Death, you will need to retrieve pieces of living metal called Sigmarite, along with forgotten technology schematics. They are vital in the process of enhancing your weapons’ combat abilities, and necessary if you are to survive the terrifying and visceral attacks of your Nighthaunt foes.