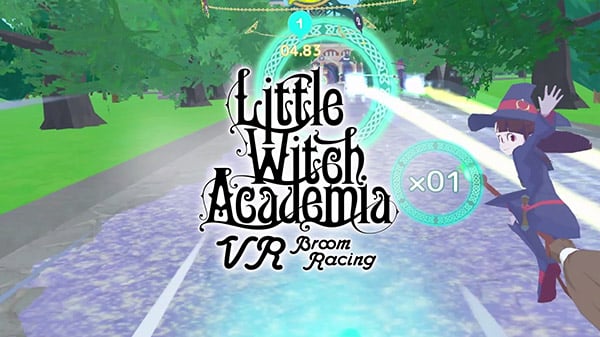 The game, based on the hit anime series by Studio TRIGGER, first launched for Oculus Quest in October 2020.

“Virtual reality is such a unique medium to bring an anime to life, and we’re lucky to work with such great talent to make Luna Nova feel real,” said UNIVRS COO Naoya Koji in a press release. “With the improvements and new content we added since the Oculus Quest launch, we expect to spellbind a whole new generation of players.”

Here is an overview of the game, via UNIVRS:

Join Little Witch Academia leading ladies Akko, Lotte, and Sucy, each voiced in both English and Japanese by their voice actors from the anime, as a new student at Luna Nova Witchcraft Academy. Learn to race on a customizable magic broom and purify ghostly spirits on the campus grounds across a dozen levels, featuring improved visuals compared to the Oculus Quest 2 launch title.

After experiencing the magic of the single-player campaign, engage in extracurricular activities in the multiplayer mode, complete with cross-platform support between Oculus Store, PlayStation VR, and SteamVR versions. Seek some extra credit in Hard Mode, where rival witches and restless spirits will deliver a new challenge to experienced spellcasters. All of this takes place in one of the smoothest virtual reality experiences available, thanks to UNIVRS’ patent-pending motion reduction technology.

The Little Witch Academia anime started with a popular short film, which led to a Kickstarter that raised more than $625,000 to fund a second film. Supporters of these magical witches continued to share the love even after the 25-episode Netflix series: Little Witch Academia: VR Broom Racing raised more than $165,000 in total between another Kickstarter campaign and popular Japanese crowdfunding site Campfire.