Traverse the galaxy in the far reaches of space as a Raider. 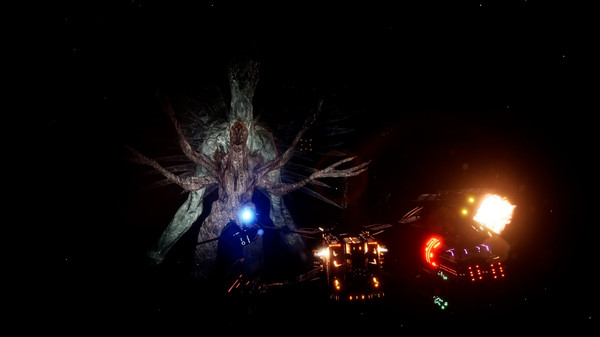 Experience the next generation of space combat in Haunted Space. Sci-fi blends with horror elements in a story-rich adventure based on exploration, fast-paced dogfighting, trading, and ship crafting, with customizable flight simulation and intense multi-stage boss battles.

In the far future, the second age of human civilization reached the distant Neterun galaxy and discovered a powerful energy called Sonic Matter. Millions of settlers arrived in Neterun’s systems and a vast factory called the Metal Mother Facility was built to harvest this valuable resource. But humanity soon discovered they were not alone…

Take on the role of a Raider, in the service of the Human Empire, as you traverse a treacherous galaxy in the far reaches of space. Take on quests across multiple systems or strike out on your own to fight, explore, and scavenge resources and credits. Trade, craft, customize your ship, and fight to survive as you uncover the mystery of a galaxy haunted by an ancient civilization.

Haunted Space is in development for PlayStation 5, Xbox Series, and PC (Steam).