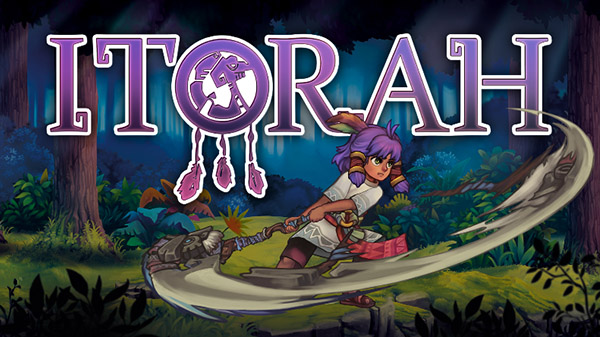 Publisher Assemble Entertainment an developer Grimbart Tales have announced hand-drawn action adventure game ITORAH for PC. It will launch via Steam in 2021.

Here is an overview of the game, via Assemble Entertainment:

ITORAH is a retro-inspired action-platformer that draws heavy inspiration from ancient Mesoamerican culture and legends. In the game, the lush and verdant land of Nahucan is under threat from an imposing enemy: The Black Plague! It’s up to the titular Itorah—who appears to be the last human left—to battle her way across multiple gorgeous biomes, combatting deadly foes and the even deadlier landscape to stop the threat and save the land she calls home.

As Itorah journeys through the world of Nahucan, she’ll meet a colorful cast of quirky characters, including her chatty and loud-mouthed weapon, which also serves as a guide, to help her understand the events of the past. She’ll need all the help she can get in order to make her way through the winding paths of Nahucan on her quest to save the land and battle the malignant contagion that threatens it!

“ITORAH is a game any player will feel instantly familiar with,” said Assemble Entertainment CEO Stefan Marcinek in a press release. “It takes all the best elements of the 8 and 16-bit platforming days and top-quality features that contemporary players expect and combines them with a hand-crafted vibrant aesthetic with tight, fluid gameplay and a heartwarming story filled with endearing characters.”

Grimbart Tales creative director and co-founder Artur Backer added, “With Assemble on board as our publishing partner, the launch of ITORAH becomes a reality and we couldn’t be more excited. ITORAH is an absolute labor of love, and our first game, so it’s really a thrilling time for us. As indie developers, we have the creative freedom to envision a universe that is shaped by numerous memories that fascinated us as children. Our goal is to create similar experiences for future generations and to pass on our passion for the fantastical.”