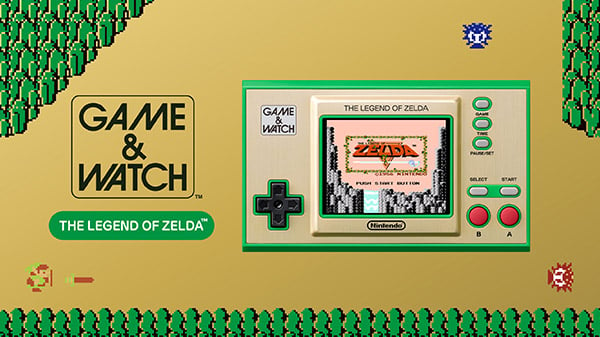 Nintendo has announced the Game & Watch: The Legend of Zelda system. It will launch on November 12 for $49.99.

Here is an overview of the system, via Nintendo.com:

With a retro look, legendary flourishes, and the power to save Hyrule, the Game & Watch: The Legend of Zelda system is a jam-packed tribute to 35 years of the Legend of Zelda series. Adventure through three iconic classics and enjoy all-new old-school fun with this stylish handheld system.

It’s dangerous to go alone—take these! Revisit some of the most iconic Legend of Zelda games with retro-inspired hardware, perfect for players and collectors alike. Play the English or Japanese versions.

In true Game & Watch fashion, the system also includes a handy digital clock and timer, and you can interact with both.

Watch as Link explores Hyrule and defeats with a one-of-a-kind interactive clock. Pick up the system and take control whenever you like!

The timer features battle scenes from Zelda II: The Adventure of Link. Set and start the timer, then see how many enemies you can defeat.

Use the packaging to proudly display this celebration of the history of The Legend of Zelda.

A Fresh Look for a Classic Device

The original Game & Watch devices came out in Japan in 1980 and were the first handheld gaming systems created by Nintendo.