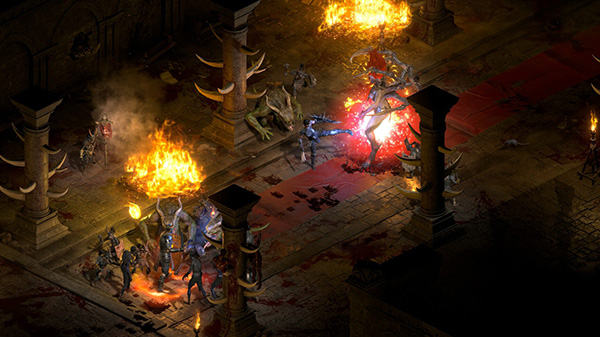 The game will be available as a standalone experience for $39.99, or as part of the Diablo Prime Evil Collection for $59.99. The latter includes Diablo II: Resurrected and Diablo III Eternal Collection—which conists of Diablo III, the “Reaper of Souls: expansion, and the “Rise of the Necromancer” content pack), and the Mephisto pet and Hatred’s Grasp wings for Diablo III.

While Diablo II: Resurrected takes full advantage of today’s modern gaming hardware, it also preserves the timeless hack-and-slash gameplay that is as engrossing and enjoyable today as it was twenty years ago—with a few quality-of-life updates Diablo veterans have been clamoring for, such as a larger stash and automatic gold pickup. Players experiencing teary-eyed nostalgia as they relive fond memories of spinning hammers and exploding corpses can seamlessly swap between the modern graphics and the original 800×600 resolution experience with the push of a button.

A Diablo II: Resurrected multiplayer open beta will take place on supporting platforms in August, featuring five of the final game’s seven highly customizable character classes for players to choose from—the Amazon, Barbarian, Paladin, and Sorceress from the core game, as well as the Druid from the included “Lord of Destruction” expansion. The Necromancer and Assassin will be available when the game officially launches.