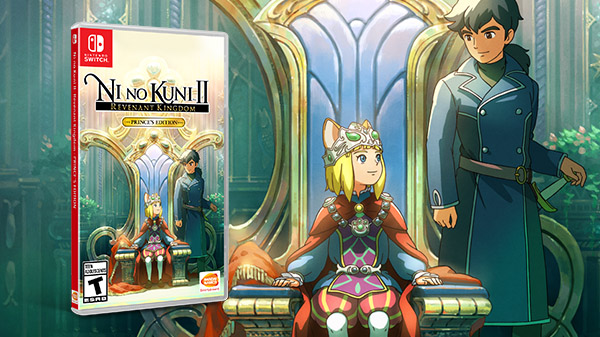 Publisher Bandai Namco and developer Level-5 have announced Ni no Kuni II: Revenant Kingdom – Prince’s Edition for Switch. It will launch both physically and digitally on September 17 in the Americas and Europe for $59.99.

Ni no Kuni II: Revenant Kingdom first launched for PlayStation 4 and PC via Steam in March 2018.

Here is an overview of the Prince’s Edition, via Bandai Namco:

Ni no Kuni II: Revenant Kingdom – Prince’s Edition, developed by world-renowned video game studio Level-5 Inc., with participation from the legendary artist Yoshiyuki Momose and music composed by Joe Hisaishi, tells the story of Evan Pettywhisker Tildrum, the young ruler of Ding Dong Dell. Evan is dethroned by a treacherous coup and must rebuild a new kingdom free of strife while uniting the whole world of Ni no Kuni. Across Evan’s grand adventure, players can explore a beautifully crafted world filled with exotic locations, a wide cast of characters to encounter, dangerous foes, and plenty of allies eager to help. Supporting Evan on his adventure are his friends Roland, Tani, Batu, Lofty and a natural phenomena known as the Higgledies. The Higgledies will provide invaluable support during battles including offensive and defensive buffs, increasing special attack power for Evan and his friends, and assist in attacking enemies. There are 100 unique Higgledies to collect, each with its own special powers. Mix and match different combinations of Higgledies during combat to strategically secure the upper hand in battles.

In addition to the full critically acclaimed campaign from the original 2018 release (available now on PlayStation 4 and PC), Ni no Kuni II: Revenant Kingdom – Prince’s Edition contains both downloadable content packs, which includes “The Lair of the Lost Lord” and “Tale of a Timeless Tome,” a $25 value.

visit gallery »
Foreclosed launches August 12 Previous post
Mutazione coming to Xbox One and Switch on May 26, physical edition announced for PS4 and Switch Next post