PC version to include all previously released updates. 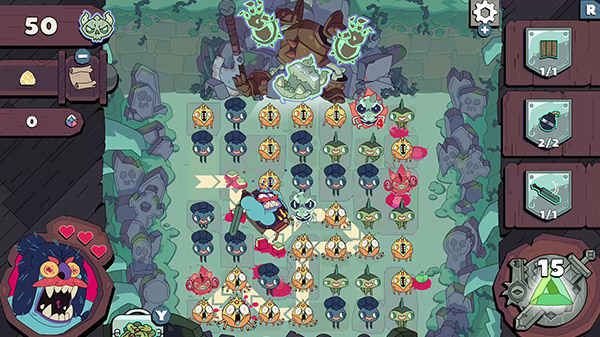 Capybara Games will release Grindstone for PC via the Epic Games Store on May 20, the developer announced.

A new update titled “The Fortune Grind” is also available today for the Switch and Apple Arcade versions. The PC version will ship with all previously released updates.

Here is an overview of the update, via Capybara Games:

“The Fortune Grind” update introduces a new twist on Grindstone‘s Daily Grind, tasking players to spin a wheel to try their luck at some helpful loot on their daily run. Be careful though, as you also run the risk of introducing new hazards and angry Jerks that will be sure to ruin Jorj’s day. The Fortune Grind update also unveils a new cave containing 10 additional perilous levels, the new Gold Health Potion item, and new entries to Hëlga’s Slöp Höuse recipe book.

Grindstone is a game of sword-slashing puzzle battles from the award-winning studio behind BELOW, Sword & Sworcery EP, Super Time Force Ultra, Critter Crunch, and Might & Magic: Clash of Heroes! Grindstone first released on Apple Arcade in September 2019 to widespread acclaim, earning many awards and nominations. Grindstone has since come out on Nintendo Switch, where it has also garnered much acclaim and was one of the best reviewed Switch games of 2020.

Grindstone Mountain is overrun with vicious Creeps! Slay your way up its treacherous peak where fortune, glory (and death) awaits!

It’ll take sharp puzzle skills and an even sharper blade to slice your way through the swarms of bloodthirsty Creeps dwelling within Grindstone‘s dungeons. Battle bosses, loot resources, discover long-lost blueprints for powerful gear, all while eviscerating the innards from your deadly foes! Over 250 levels of intense puzzle-battling madness!