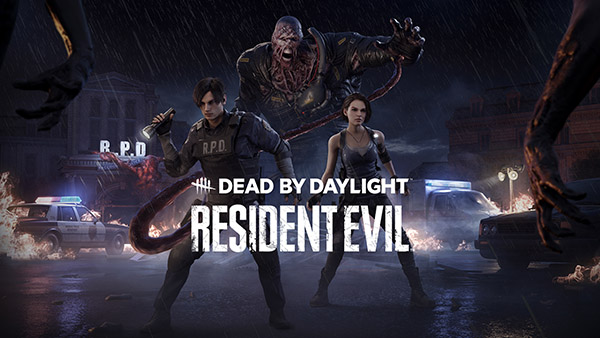 The Dead by Daylight “Resident Evil Chapter” will launch on June 15 for $11.99, developer Behaviour Interactive announced. Users who purchase the chapter will also receive an exclusive free “Umbrella Corporation” charm.

Here is an overview of the content, via Behaviour Interactive:

Dead by Daylight began as a passion project with the simple goal of letting gamers play as the villain in a horror movie. Five years later, and the game has been downloaded over 36 million times worldwide across all platforms. Launched in 2016 by Canada’s largest independent gaming studio, Behaviour Interactive, Dead by Daylight now features 20 chapters, 36 maps as well as 27 Survivors and 24 Killers, both original and licensed.

■ Everything You Need to Know About the Resident Evil Chapter

One of the most anticipated chapters to be released for Dead by Daylight, the Resident Evil Chapter welcomes two new Survivors in the Fog: Leon S. Kennedy and Jill Valentine. A highly acclaimed character from the renowned franchise, Leon S. Kennedy dedicated his life to protecting civilians from the Umbrella Corporation’s calamities and will now spend his days fighting for survival. Equally as esteemed by fans, Jill Valentine is a brilliant S.T.A.R.S. officer who managed to survive the Mansion Incident in addition to make it out of the Raccoon City collapse alive before she was taken by The Entity.

Each Survivor will come with three perks that fans will be thrilled to enjoy. Flashbang, one of Leon’s perks, marks a first by enabling players to spawn an entirely new item. Upon reaching a certain rate of repair progress on generators, Leon will be able to hide in a locker and craft a flash grenade, which can then be used to distract or blind the Killer temporarily.

Those who prefer to play as Killer will have their share of excitement too as they will get to embody Resident Evil‘s very own Nemesis, known in-game as The Tyrant. This monstrous character can infect Survivors with his powerful tentacle attacks. The more he infects them, the more power he gains as his tentacle’s reach increases. To counter his harmful strikes, Survivors can rely on vaccines peppered throughout the maps. Available in limited quantities, the shots will help relieve the Survivors’ infection and allow them to continue on their mission to fix generators, open the gates, and save their lives.

Beware of the Zombies

For the first time in Dead by Daylight‘s history, the Resident Evil Chapter will feature an AI-assisted Killer. On top of avoiding deadly attacks by Nemesis, Survivors will also need to be careful of lurking zombies waiting to take a bite out of them. These AI-controlled monsters will bring a new dynamic to the already tense hide-and-seek gameplay and will require Survivors to adapt and develop new strategies.

In addition to stepping into the shoes of these famed characters, players will also get the quintessential Resident Evil experience by exploring a new map: the Raccoon City Police Station, a now decrepit relic of what was once a beacon of justice and one of the city’s emblematic landmarks.

Dead by Daylight is available now for PlayStation 5, Xbox Series, PlayStation 4, Xbox One, Switch, PC via Steam and the Microsoft Store, and Stadia.

Watch a new set of videos below. View a set of screenshots at the gallery.