First details on the story, characters, systems, and more. 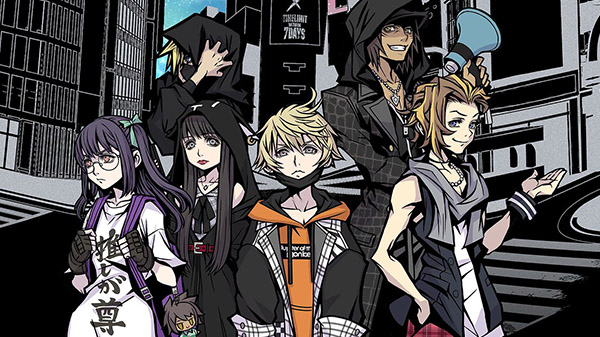 NEO: The World Ends with You will launch for PlayStation 4 and Switch on July 27, followed by PC via the Epic Games Store this summer, publisher Square Enix announced. The PC version is newly announced.

In Japan, the game will cost 7,480 yen. A 21,000 yen “NEO: The World Ends with Bag” edition will also be available via the Square Enix e-Store and 7net Shopping, which includes a copy of the game, mini soundtrack, art book, pin badge set in a cassette-themed case, Mr. Mew hanging pouch with snap ring, and record bag with graffiti pattern.

Users who purchase the game via the Square Enix Store or Square Enix e-Store by August 26 will receive the downloadable content “Reapers’ Game Survival Set,” which includes the following three in-game items:

Users who purchase the game via the PlayStation Store or Nintendo eShop by August 26 will receive the “Legendary Threads Set,” which contains five equippable items once used by the legendary Neku. These items are normally unavailable until you proceed considerably far in the story. The set includes:

It was just another seemingly ordinary day in Shibuya, but not for Rindo. He could tell something about the city felt different.

A girl with an ominous aura appears before him, identifying herself as a so-called Reaper. With some trepidation, Rindo decides to play along with this Reapers’ Game, but something is weird…

Battles with monsters called “the Noise”, pins that grant mysterious powers, and a place called Shibuya UG (Underground) to set the stage for the Game—it isn’t long until Rindo starts to have second thoughts on his decision.

The latest Players to join the Reapers’ Game: the Wicked Twisters.

One of the newest Players in the Reapers’ Game, Rindo is a high schooler to whom searching for info on his phone is second nature. He prefers to go with the flow, and although he doesn’t go out of his way to interact with others, he won’t turn them away if they come to him first. Thrust into the Game without even realizing it, he now serves as the de facto leader of the Wicked Twisters.

Rindo’s happy-go-lucky classmate and fellow Player in the Reapers’ Game, Fret boasts the ability to get along with just about anyone. While he styles himself as a natural conversationalist, he prefers to keep things light, subconsciously avoiding subjects that are too serious. He enjoys walking around town with his buddy “Rindude.”

Another Player in the Reapers’ Game, Nagi is a college student whose youthful appearance leads others to mistake her for a middle schooler. She is deeply passionate about her pastimes, devoting all of her time and energy to her favorite games. Highly perceptive, she is acutely aware of others’ emotions, and shows disdain toward those she deems superficial and disingenuous.

A fellow Player in the Reapers’ Game, Minamimoto puts his impressive psychic powers to use when he saves Rindo and the gang from a tight spot early on, then forces himself onto their team.

He calculates every possible future using his own unique formulas and acts in accordance with the values he discovers, but he remains a mystery to all around him. He seems to have his sights set on something greater than Rindo and the gang.

Shiba currently ranks number one among the Reapers in the Shibuya UG, having worked his way to the top within a year of his arrival. He also serves as the Game’s Master, arbiter of its rules, and encourages its Players to keep things hot. His psychic powers far surpass those of his fellow Reapers, ensuring that none dare disobey him.

NEO: The World Ends with You takes place in Shibuya, Tokyo. You may recognize some of the landmarks, but the city itself is depicted with an artistic touch unlike anything you’ve seen before.

Dialogue sequences are presented with a comic-esque aesthetic that keeps the story moving while highlighting character interactions.

Scanning is one of the fundamental psychs available to players. Press the button to begin scanning your surroundings, which will allow you to read people’s thoughts and visualize enemies known as Noise.

Noise will start to chase you if you get too close and coming into contact with one will initiate combat. Quickly touch several Noise symbols to start a chain battle.

Scan your surroundings to see what the people of Shibuya have on their minds. You might stumble upon some important pieces of information, so be sure to scan often!

Team up to take down the Noise!

Each teammate can equip one pin at a time. Press the corresponding button to unleash the psych contained therein. Simple controls keep combat moving!

Switch your team’s psychs by changing your pin loadout. Choose from hundreds of pins that let you attack the Noise, heal your team, or boost your allies’ abilities!

Watch a new trailer below. View a new set of screenshots at the gallery. Visit the official website here: English, Japanese.