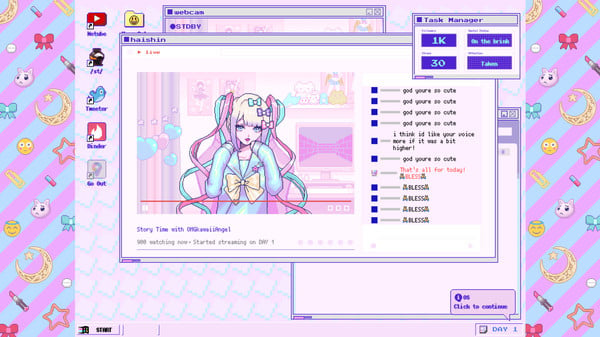 Point-and-click adventure game Needy Girl Overdose will launch for PC via Steam on June 5 for $15.99, publisher and developer Why So Serious? and developer Xemono announced. It will support English, Japanese, and Chinese language options.

The companies also debuted the official music video for the game’s theme song, “Internet Overdose” sung by Kotoko and written by AIobahn. It will also be available on Spotify and other music streaming services starting April 29.

Turn “Ame-chan”—somewhat of a hot mess of a girl – into an OMGWTF-cute internet angel and jumpstart her career as a live streamer for the most hardcore otakus online!

As Ame-chan’s beloved (???) “P-chan,” offer daily commentary and guidance to help foster her into a top-tier streamer. She’ll start out getting few comments and even less followers, but under your direction and guidance she can amass more and more devoted listeners/obsessed fans, turning her into a super-popular streamer—and thus allowing you to squeeze stupid amounts of cash out of her donation-happy otaku followers.

It’s not all about streaming—sometimes you just need to take a little break, too! Take Ame-chan on dates, serve her up a little bit of naughtiness once in awhile, provide her with a little something-something to take the edge off when she needs to release some pent-up stress, and use online dating apps to send her on dates with other dudes to help keep her happy and mentally healthy. *NOTE: This is actually a perfectly wholesome game, containing absolutely no explicit sexual references or expressions nor illegal substances.

You can see the results of your daily actions and behavior via social media, where Ame-chan will use both public and private accounts to talk about you. People have a tendency to act supportive and friendly on the outside, while talking loads of smack and spreading rumors privately.

You’ll sometimes receive long-winded, tedious criticisms and insults, but that’s just par for the course when dealing with a cute girl streaming on the internet. Be sure to take proper care of her.

The game features multiple endings, and your streamer will do things like become weird and emo for various reasons, subject her trusty P-chan to harm, and generally get messed up in the head. Begin your adventure and see for yourself whether a happy ending is really even possible for a cute yet disturbed girl on the modern-day internet.