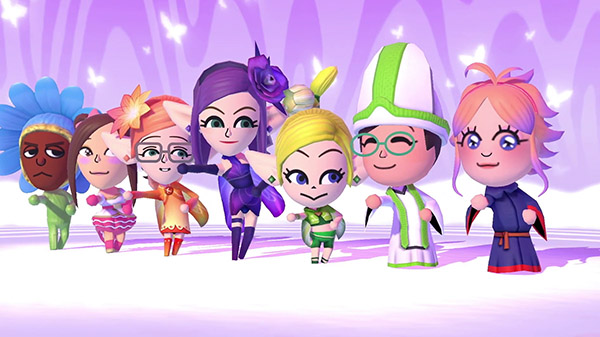 Nintendo has released a demo for the Switch version of Miitopia via the Nintendo eShop.

Here is an overview of the demo, via Nintendo:

In this demo of the game’s first area, you’ll be able to create and customize your Mii characters with wigs and makeup. While it can be fun to play as a Mii character that looks like you, Miitopia also lets you cast your friends, family or anyone you choose to star in your journey. Watch your characters come to life as your best friend and dear old grandma team up to topple the face-stealing Dark Lord, who just so happens to resemble your grumpy uncle.

With the use of Nintendo Switch Online, you’ll also be able to share and receive Mii characters with friends, as well as download popular Mii characters from the Nintendo 3DS version of Miitopia. Pair up your Mii characters at inns to build their relationships for some personality-packed interactions. Characters may also learn skills like “lend a hand” and help each other out during scuffles. Bring your friends into battle for side-splitting fun in this comedy-filled quest!

Your save data from the demo can carry over to the full game when purchased, so if you enjoy your first bite, head over to Nintendo eShop to pre-purchase the full smorgasbord of swashbuckling silliness.

Miitopia is due out for Switch on May 21.