Cosmic Top Secret coming to PS4, Xbox One, and Switch on May 21 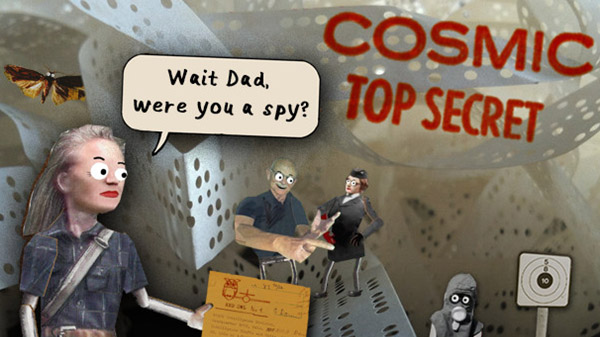 Publisher Nakana Games and developer Klassefilm will release Cosmic Top Secret for PlayStation 4, Xbox One, and Switch on May 21, the companies announced.

Cosmic Top Secret first launched for PC via Steam, the Humble Store, and Itch.io, iOS via the App Store, and Android via Google Play, in November 2018. It follows the story of T on her quest to uncover the truth about her parents’ work for the Danish Intelligence during the Cold War.

Do we really know each other? Cosmic Top Secret plunges players into a fantastic world of intrigue and espionage where all is not what it seems. Based on actual events, play as T and help her unravel the truth about her parents’ work as spies for the during the Cold War.

Brought to life through its cast of colorful characters, Cosmic Top Secret features a truly unique storybook world made entirely from paper and cardboard. Seven years in the making and formed from hours of real-life audio and documentary footage; this is an incredible real-life mystery like you’ve never seen before.

Anontastic ⋅ NEO: The World Ends with You for PC launches September 28 ⋅ 5 minutes ago