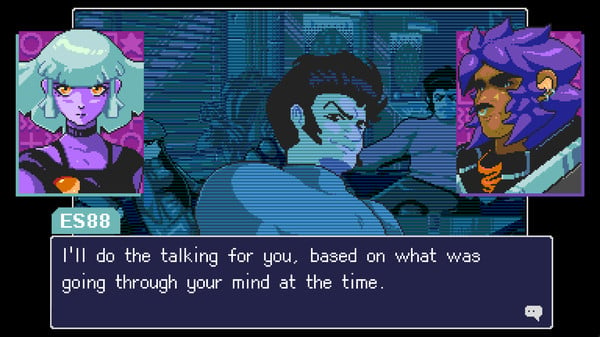 Read Only Memories: NEURODIVER will launch for PlayStation 5 and Switch in addition to its previously announced PlayStation 4, Xbox One, PC, and Mac versions, developer MidBoss announced. The PC version will also be available via the Epic Games Store in addition to Steam.

MidBoss has also released a demo for Read Only Memories: NEURODIVER via Steam and the Epic Games Store. It is a prologue that introduces the protagonist ES88 and her psychic abilities allowing her to dive into the memories of others. Players will help a bounty hunter recall what happened during a shady business deal gone wrong.

“Our passionate community is in love with Neo-San Francisco and we’re happy to give them a taste of what we are working on ahead of the console and PC releases later this year,” said MidBoss CEO Cade Peterson in a press release. “This demo shows off the new puzzle mechanics and some of the characters adding flavor to the next entry in our LGBTQ+-friendly world.”

Take on the role of ES88, a telepath with the ability to delve into memories employed by MINERVA, a powerful organization specializing in neurotechnology and extrasensory projection phenomena. Tasked with tracking down the Golden Butterfly, a naturally gifted psychic on the loose and wreaking havoc through the subconscious minds of Neo-San Francisco, by using the Neurodiver to search the memories in which it hides. Read Only Memories: NEURODIVER’s Deep Dive mechanic enables ES88 to identify, manipulate, and unlock information, though overuse can irreparably corrupt her target’s memory.

NEURODIVER will introduce new characters, locations, and mechanics, including the ability to dive into and change other characters’ memories, as well as overhauled art and an unsolved case to crack with multiple endings.

Read Only Memories: NEURODIVER is due out in Q1 2022. The Japanese localization and voice-over, as well as Xbox One support for all regions will be provided by Chorus Worldwide.

Watch a trailer from June 2020 below.