Early Type version 0.2 to be distributed at Hakurei Jinja Reitaisai on March 21. 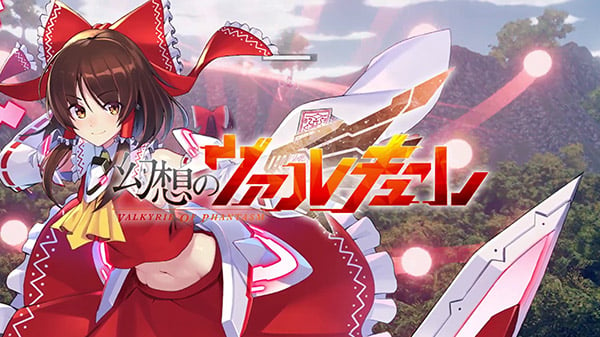 Freely fly through the sky, dodge the bullet barrages coming your way, and shoot spells…

It is said that the “Valykrie Arms,” brought to Gensokyo by someone from the outside, possess the power to multiply the wearer’s aerial prowess, and the deeper its bonds as a partner, the faster and stronger the wearer will become.

Scattered throughout Gensokyo, the Valkyrie Arms will become the girls’ wings and lead them to ultra high-speed bullet barrage battles.

With the project fully underway, character designs have been renewed. The combination of Touhou Project characters and mechanical units produces the visual concept. (Reimu Hakurei will be the only playable character in the “Early Type” release detailed below.)

Valkyrie of Phantasm version 0.2 for Windows 7, 8, and 10 will be distributed at Hakurei Jinja Reitaisai on March 21. By using the download code printed on the card, you will be able to download and play version 0.2 and its updates (versions 0.2 to 0.29).

Valkyrie of Phantasm was previously announced as planned for release on PlayStation 4, Switch, and PC. However, the latest trailer notes that the character roster, supported platforms, and completion timing has yet to be determined.

The Jokester ⋅ The Great Ace Attorney Chronicles announced for PS4, Switch, and PC ⋅ one minute ago

Kriss ⋅ The Great Ace Attorney Chronicles announced for PS4, Switch, and PC ⋅ one minute ago