A heartwarming tale of human and dragon.

Nippon Ichi Software has released the teaser trailer, and first information and screenshots for its newly announced RPG The Wicked King and the Noble Hero from The Liar Princess and the Blind Prince creator Sayaka Oda, which is due out for PlayStation 4 and Switch on June 24 in Japan for 6,980 yen.

First, here is the teaser trailer:

Nippon Ichi Software will release The Wicked King and the Noble Hero for PlayStation 4 and Switch on June 24, 2021 (in Japan).

This game is an RPG starring the human child Yuu, who longs to become a “hero,” and the dragon “overlord” who fosters her.

With line art-esque graphics that look as charming as a picture book, players can enjoy a heartwarming story born from the interspecies communication between dragon and human.

The world was ruled by the dragon Overlord, who possesses great power. However, a brave young Hero brought an end to his reign.

“I do not want to take your life,” said the Hero. So he instead cut off one of the Overlord’s horns—the source of his power—and let him live.

After, the Hero went to the lonely Overlord, who was healing in solitude, and spoke to him. And thanks to the days spent with the Hero, his terrifying nature as the Overlord gradually grew more peaceful, and before he knew it, he and the Hero were close friends.

One day, the Hero appeared before the Overlord with a life-threatening injury and said, “Please raise my daughter well in my stead, for I will soon die.” In his arms he held a baby.

“It is for this moment that I was able to survive,” the Overlord thought.

—Even if she has to defeat him one day.

Yuu’s foster parent and king of monsters. Although once feared by the people as the wicked Overlord, he has since turned over a new leaf and even secretly lends aid to humans. He is helping Yuu train to become a noble hero like her father.

The child of the late Hero. A human girl who every night hears stories of the adventures of her father, the Hero, from the King Dragon and longs to become a hero like him. But she is unaware that the King Dragon, her foster parent, was the Overlord that her father once battled.

The next update will introduce several unique ally characters that will join you on your adventure.

The Wicked King and the Noble Hero is a role-playing game in which you can watch over, assist, and adventure alongside the young child Yuu as she grows into a noble hero.

The setting is a somewhat mysterious world where monsters roam about. Yuu will run through magical forests drawn like a painting, and encounter, battle, and deepen her bonds with an assortment of monsters.

This is Yuu’s first big adventure. And you can adventure through this world alongside her.

—Warm graphics like a hand-drawn picture book. Like traveling through a picture book, the backgrounds are animated by plants, trees, and small animals.

One of the game’s key features is its analog-style graphics drawn with pen, as was popular in The Liar Princess and the Blind Prince.

Many on-screen elements, including the characters, stages, and user interface, have been hand-drawn by the designers.

During your adventure, you can enjoy detailed 2D graphics throughout the whole experience, including backgrounds drawn by pen and watercolor, multiple layers of scrolling backgrounds that give you a sense of the forest’s depth, and soft light textures.

Furthermore, the background graphics are animated while maintaining the game’s hand-drawn textures, deepening the immersion and creating a stronger sense of being in the world of a picture book.

—The game features backgrounds drawn by pen and watercolor like going on an adventure in a picture book.

—Some story parts feature pencil-drawn illustrations with light touchups that liven up the story.

In The Wicked King and the Noble Hero, the fusion between game and picture book-like visuals popular in The Liar Princess and the Blind Prince is even further explored.

Event scenes progress by turning pages, and narrator Reina Kondou will draw you deeper into the story with her pleasant reading style.

Part of Your Training

While adventuring, monsters may appear from out of the grass. But fear not. Yuu can fight monsters using her attacks and tools. Take calm action and drive away the monsters.

By winning battles, Yuu will gradually grow. You will also obtain money (shells), which can be used to purchase useful tools and items.

—In battle, Yuu and the monsters take turns performing actions.

—By winning battles, Yuu will gradually grow. The King Dragon watching from the sidelines may even smile.

The King Dragon is actually an extreme worrywart. Worried about Yuu’s well-being, the King Dragon secretly watches over her adventures, destroys obstacles, and helps Yuu with attacks that she cannot perform on her own. But it is a secret to Yuu that he is following along on her adventure.

—Yuu’s special skill: “Fire Slash.” The king dragon secret lights Yuu’s sword in flames since she is still unable to do it on her own.

Interacting with the World’s Curious Inhabitants

While adventuring, you may see monsters standing in the streets, including residents and servants of the King Dragon. Fear not. While some monsters are ferocious, others are well-mannered. They will not suddenly attack you, so take the initiative and talk to them. There may be something bothering them, or they may give you valuable information for your adventure.

—Something seems to be troubling this monster. Talk to him about his problems.

—Sometimes you may even obtain valuable information for your adventure.

The End of Each Day

After a lot of adventuring, return to the cave where Yuu and the King Dragon live before nightfall. Slip into your straw bed and get ready for a good night’s sleep. Yuu will tell the King Dragon all about what happened that day, and the King Dragon will listen with a smile and tell Yuu of her father’s adventures. What kinds of stories will you hear each night?

—Yuu and the Overlord’s bed. It is more comfortable than one might think.

—Yuu hears the story of the Hero’s adventures every night. No matter how many times she hears them, her excitement never fades.

—Yuu and the King Dragon.

—There are caves to be found all over. Some even have giant mushrooms growing inside.

—A land covered in snow year-round. There are some hotspots popular among travelers.

—A village where monsters are gathered.

Each retailer will offer a different original bonus for purchasing The Wicked King and the Noble Hero. Here is a rough look at some of the illustrations each shop will be using. 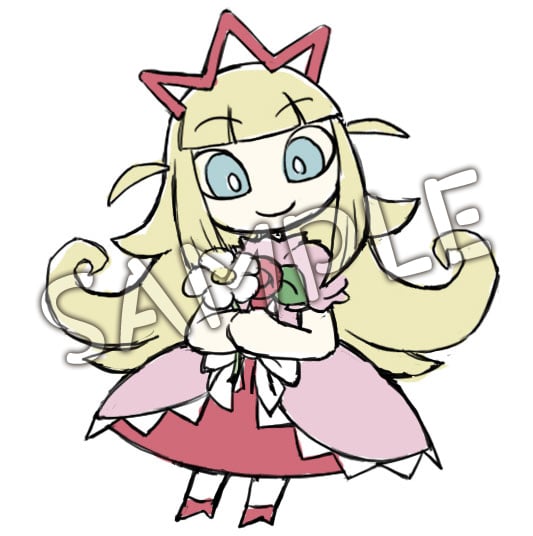 The limited edition will include an original box, mini art book, and two-disc soundtrack CD.