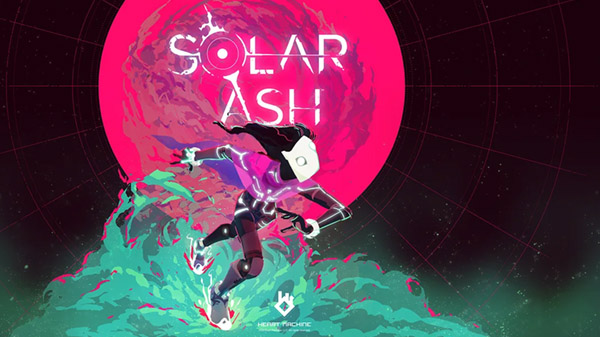 The transition from 2D to 3D took some time for us—building the right pipeline, gathering the right folks. We feel we’ve successfully been able to make that jump, and we hope you feel that way too.

Solar Ash is a third-person action platformer with massive scale and a focus on fluidity in movement. We really wanted to push scale on multiple fronts. Our traversable world is huge, featuring sunken cities, vast water shelves, and dangerous lava zones for players to fight through and explore.

You’ll play as Rei, a Voidrunner looking to save her home world from the Ultravoid itself—a massive black hole that swallows entire worlds.

Fortunately, Rei is well equipped for this task with incredible speed, agility, and other tools to help on her mission. She covers vast distances surfing across the ashen clouds with ease. She seamlessly grapples across gaps and up huge vertical spaces. She gracefully grinds on rails littered throughout the world to reach greater heights and secret enclaves.

Combat is fluid, simple, and satisfying. We want to empower the player, showcasing just how skilled Rei is at what she does. As you progress, you’ll encounter larger and more twisted creatures, hinting at the more insidious nature of this maw of the cosmos. These encounters will only escalate in challenge and scale the deeper you explore, requiring greater timing and fine platforming skills to complete.

Eventually, Rei will fight the largest creatures in the Ultravoid: massive remnants hewn from bone and viscose, tendriled, sinewy sludge. These beasts hold the key to progressing her quest and saving her world. Rei is determined to overcome this (literally) huge challenge at any cost.

It’s an exciting, scary relief that we’re able to finally showcase what Heart Machine has been working on all this time. Solar Ash is an experience we are deeply proud of—everything from the world we’ve built, to the amazing team we’ve become and, eventually, the game we’ll be able to put in front of you later this year on PS5 and PS4.

Solar Ash is due out for PlayStation 5, PlayStation 4, and PC via the Epic Games Store in 2021.