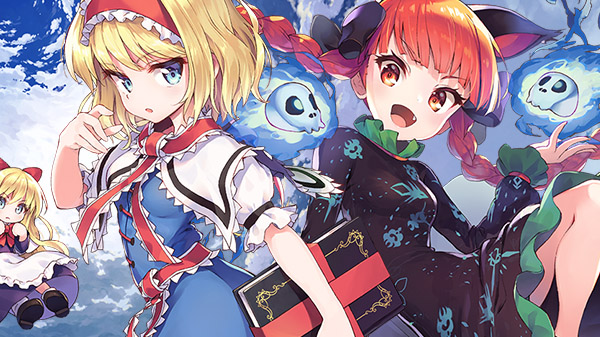 The PlayStation 4 version of Touhou Project racing game Gensou Skydrift will launch via the PlayStation Store on March 9 for $23.99 / €21.99 / 2,980 yen worldwide, publisher Phoenixx and developer illuCalab announced. It will support English, Japanese, and Chinese (Simplified and Traditional) language options.

The PlayStation 4 version will ship with new playable characters Alice Margatroid and Rin Kaenbyou, and new stages “Heaven” and “Redevelopment Area B,” which will be added to the currently available Switch and PC (Steam) versions via a free update on the same date.

Although the Switch and PC versions of Gensou Skydrift support cross-platform multiplayer, the PlayStation 4 version will not.

Here is a brief overview of the game, via Phoenixx:

Zip through 20 stages with a powerful duo chosen from 22 characters, one acting as a vehicle with the other riding on her back as driver, each with exclusive stats and magic spells. Strategically swap the two between rider and vehicle positions to perfectly handle the twists and turns of the tracks or use abilities at just the right moment.

Two new characters and two new courses will make their Gensou Skydriftt debut in both the new PlayStation version and now-available Nintendo Switch and Steam versions. Beloved Touhou characters Alice Margatroid and Rin Kaenbyou will be playable in all versions on March 9. Race through vibrant cherry blossoms in the Heaven course, and through a futuristic city in Redevelopment Area B.

Dive into the magical narrative in Story Mode, battle for the best lap in Time Attack, or face the competition in Versus Mode, which hosts leagues of high-flying action in online multiplayer against up to seven opponents. Speed through the fantasy realm of Gensokyo, filled with charming creatures, flora and multicolored skies depicted in 3D in this fan-made entry in the Guiness World Record-holding Touhou Project franchise bringing the joys of racing to PlayStation 4.

“Racing games can be intimidating to break into, but a game made by fans and featuring a cute and colorful cast can help change that perception,” said illuCalab lead developer Eiki in a press release. “Gensou Skydrift melds the best of a beloved genre with the magic and lore of the Touhou Project to create a game which hides depth and strategy beneath a veneer of simplicity.”