12 to 15 hours to clear the main story without side activities. 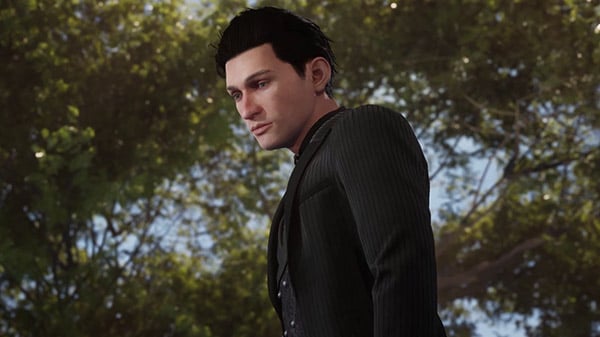 Frogwares has released the first part of a “Your Questions Answered” video series for Sherlock Holmes: Chapter One in which it answers user questions about the upcoming game. Part one talks disguises, playtime, and voice cast.

Hey everybody, my name is Sergey and I’m a part of Frogwares, and today I got a list of questions you guys had about Sherlock Holmes: Chapter One, and in this video, I want to answer some of them, while the rest is coming soon! Alright, let’s go to our first question.

How big is the game going to be and how many cases will it cover?

Well, I can tell you that there are five main quests in the game and they are all connected through one continuous story, and we also have more than 30 side quests and some of them are actually as big as the main ones. Also I’d say it would take around 12 to 15 hours to beat the main story and maybe 40 to 50 hours if you want to see absolutely everything there is in the game.

Will the game be focused solely on the mystery involving the death of Sherlock’s mother or will we have minor mysteries to deal with along the way too?

Sherlock is indeed driven by his goal to learn the truth about his mother—that’s his motivation for the main quest, but keep in mind that he also wants to prove to everybody that he’s a real detective, so he’s eager to investigate any incidents—or side quests if you will—that occur on the island, and they all offer different stories. Some of them are linked to Sherlock and Jon and their past, while the others revolve around the people on the island and the skeletons in their closet.

Is the game very linear or will we have options as to what quests we do and when?

Chapter One is of course an open-world game so after you complete the first main quest you’ll be free to explore the island and find new quests on your own. It’s up to you to choose what you want to do and when, so you can juggle both main and side content.

Will Sherlock wear any disguise costumes this time?

Uh, yeah! Disguises are a big part of Chapter One—as you play you can find or buy new outfits that will help you gain the trust of different social groups, gain access to closed off areas or simply customize how your Sherlock looks. You can get new outfits, hats, glasses, change  facial hair, etc. You can even apply bruises and wrinkles if you need to look older.

I read that we’d be able to decorate the mansion, so will we be able to shop for furniture and clothes or will they get unlocked as we play?

It’s actually both. You can find or earn some as a reward or sometimes you’ll need to buy them from the local vendors—that’s how it works.

Will the game have multiple outcomes for cases or endings like in the previous ones?

Oh yes, definitely! All main quests and more side quests will have different outcomes based on your deduction choices as well as moral choices. And of course, the game itself will offer several different endings.

Will it focus on just solving puzzles or will we see Sherlock do some fighting?

We’ll see Sherlock do some fighting as well. Where it makes sense for the story, that’s all I can say for now.

When can we expect to see gameplay and who’s on the voice cast?

I’ll be honest we’re not ready to show you gameplay just yet because a lot of things are still being worked on. As for the voice cast, let’s have a small demonstration…

All right, and the next question is, how much of The Sinking City structure will there be. The inquiries will be conducted in a linear way, or will be free to make mistakes and declare guilty the wrong person?

Yes, you can definitely accuse the wrong person, like in Sherlock Holmes: Crimes and Punishments, for example. In each main quest you will have several different suspects and usually you can make deductions that either of them could be responsible for the crime. It depends on how many clues you have found and how you interpret their context and piece them together, so it’s possible to fail your investigation, but this story will continue regardless.

Okay, and the last question for today.

Will there be a teleporting Watson option? I always enjoyed how in the older games he would standstill as you walked away from him, you would turn around and BOOM, he’s standing right in front of you! I miss that.

Well I guess it would be quite a shocker if Watson teleported in Chapter One… considering that he’s not even in the game. Yeah…

All right, thank you everybody, as I said, the rest of the questions is coming soon, so I’ll be seeing you then. Enjoy the rest of your day.