Due out in 2021 with English language support. 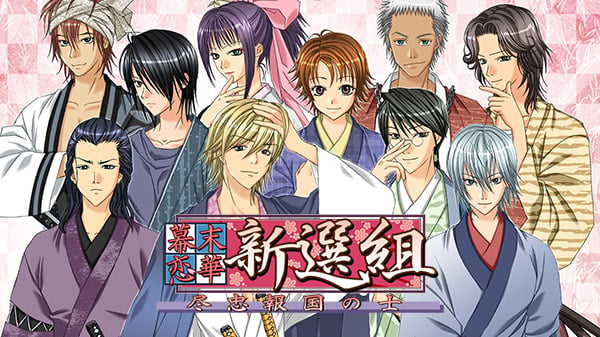 D3 Publisher and developer VRIDGE will release otome visual novel Bakumatsu Renka Shinsengumi for Switch via the Nintendo eShop and PC via Steam in 2021 worldwide, the companies announced. It will feature Japanese audio and English, Japanese, and Traditional Chinese subtitles. In Japan, the Switch version will be available both physically and digitally.

Bakumatsu Renka Shinsengumi first launched for PlayStation 2 in December 2004 in Japan, followed by DS in November 2008. This new release, which is subtitled Jinchuu Houkoku no Shi in Japan (but drops the subtitle for the west), is an enhanced port with high-resolution support, system improvements, and more.

Suzuka Sakuraba (name changeable) is the only daughter of the head of a small-town dojo in Aizu. However, her father, who dreamed of making a name for himself with the sword, suddenly left, abandoned his dojo and family. The girl had no choice but to close the dojo, which had few students, and serve Teruhime, the sister-in-law of Aizu Domain daimyo Katamori Matsudaira, with the help of her mother, who worked at the daimyo’s residence in Edo.

The girl, who entered the daimyo’s domain as a replacement for her remarried mother, eventually realizes that her father’s dream of becoming skilled with a sword had become her own. Teruhime, who opened her heart to the girl’s troubles, recalled the group of swordsmen she heard about from Katamori, who served as the Military Commissioner of Kyoto.

Since that group of swordsmen known as the Mibu Roushi were among the ranks of the Aizu domain, Teruhime asked her brother-in-law Katamori to put in a good word for the girl to join the group. And so, despite being a woman, she heads to the Imperial capital where the Mibu Roushi is based to make a name for herself with the sword.

Formed by swordfighters… the Mibu Roushi is the group that would later become known as the “Shinsengumi.”

A sorrowful, fleeting love story set in a turbulent era.

The 2008-released DS title Bakumatsu Renka Shinsengumi reappears with a new look. This is a romance visual novel that depicts the protagonist’s growth and her connection with the other members of the Shinsengumi, intertwined with the historical events and turmoil that occurred in real-life. As the first female member of the Shinsengumi, she will deepen her bonds with Shinsengumi members such as Isami Kondou and Toshizou Hijikata, and eventually fall in love. What fate awaits her and her lover at the end of the turbulent era…?

Update 01/22/21 at 2:00 a.m.: D3 Publisher has sent out the official English press release, confirming the English title to be Bakumatsu Renka Shinsengumi, sans the Jinchuu Houkoku no Shi subtitle attached to the Japanese title.