From the Mages. brand Love & Art. 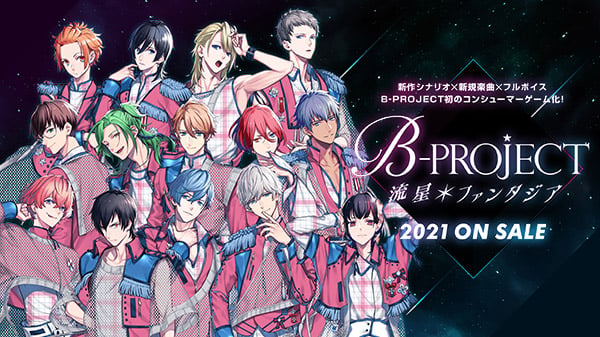 B-Project: Ryuusei Fantasia, Love & Art’s November 2020-announced visual novel based on the boys virtual idol group B-Project cross-media project, will launch for Switch as well as iOS and Android in 2021 in Japan, the Mages. brand announced.

An unknown past and hidden secrets now revealed.

What road will the troubled boys choose as idols, and as people—?

B-Project is a special unit formed of the three male idol groups Kitakore, THRIVE, and MooNs. And last year, the four members of KiLLER KiNG joined as a new addition.

Shining more and more each day, their presence in the industry is more prominent than ever. The 14 members, each wholly unique, are all running toward the same dream, one much more difficult than anyone else could imagine.

And yet even today, all 14 members of B-Project gave their fans the ultimate performance on the country’s largest stage, the Japan Dome. If you close your eyes, you can still hear the voices of the 14 members echo in harmony throughout the venue.

That was step one towards greater success. We were promised a bright future.

—Until that moment, we believed it without a doubt.