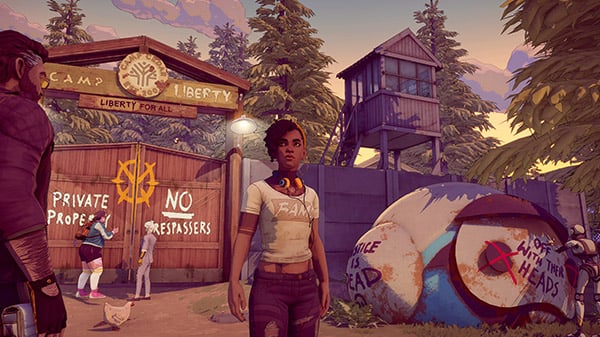 Dustborn, the story-driven action adventure game from developer Red Thread Games announced in June, will be published by Quantic Dream, the company announced. It is planned for release on consoles and PC via Steam in 2021.

“Quantic Dream shares our passion and love for great narratives and interactive storytelling,” said Read Thread Games creative director Ragnar Tornquist in a press release. “It was vitally important for us to only work with someone who truly understood and appreciated our vision for this game, and we couldn’t have asked for a better partner to help us bring Dustborn to players around the world.”

Quantic Dream CEO Guillaume de Fondaumiere added, “We are very excited to work with the team at Red Thread Games on this beautiful project. From the very beginning, we were captivated by Dustborn‘s ambition, its visual and gameplay originality, its colorful characters and the themes it addresses. Our goal as a publisher is to enable Red Thread Games to express their vision in the best way and then share it with as many people as possible. Quantic Dream will provide Red Thread Games with its own technical and editorial resources.”

There is no hope.

Set in a vibrant and perilous post-infodemic America inspired by graphic novels, a band of misfits and outcasts must cross a divided continent to transport a mysterious package from California to Nova Scotia.

Welcome to the divided states of America.

The year is 2030, three decades after the Broadcast.

You play Pax: ex-con, outcast, con-artist, and Anomal with superhuman powers fueled by disinformation. Your job: to transport a package across a divided America. But this is not a one-woman job. The fanatical Puritans are on your ass, the authoritarian Justice is in your way, and you’re four-months pregnant. You need help. You need a crew.

Joined by a motley mob of misfits with their own weird powers, you must overcome the many obstacles that stand in your way—through manipulation, subterfuge, and force—to reach your final destination and escape your troubled past.

You just can’t without your crew.

Recruit and manage a band of outcasts and misfits with weird powers, compelling personal stories, and conflicting personalities. Manage your headstrong crew through words and actions, and use their powers to fight your pursuers and overcome obstacles along the road, as you stand united in the face of overwhelming adversity.

A road trip across a divided continent.

Take a road trip across the continent, from the Corporate Republic of Pacifica to the Free Nation of Nova Scotia. Explore new places, take on unexpected assignments, and recruit new crew members. See the beautiful sights along the highway, rendered in a colorful graphic-novel-inspired art style, as you traverse an America irrevocably changed by civil war, mass migration, and global warming.

Words have power. Like, actual power. Fight your pursuers with weaponized words, and use wordcraft in conversations to manipulate people with the power of disinformation. Discover, record and remix arcane Echoes to craft new words, and learn to wield a lingual arsenal against enemies…and friends.