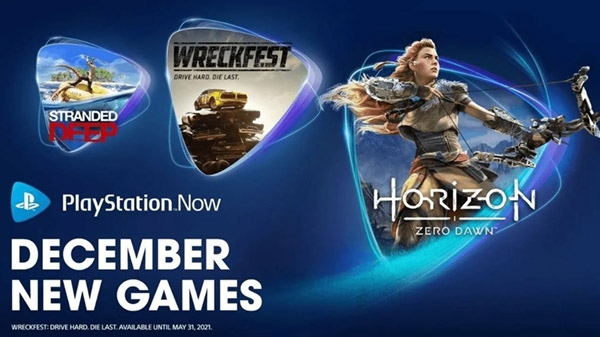 Here is an overview each new game, via Sony Interactive Entertainment:

Explode into battle as a team of up to four bros in side-scrolling run-and-gun platforming missions to eliminate the forces that threaten our way of life—or go head-to-head against other players in super destructive deathmatch modes. Unleash scores of unique weapons and set off incredible chain reactions of fire, napalm and flying limbs—all in the name of freedom.

Assume the role of the most unpredictable and enigmatic of the Four Horsemen Fury as she hunts down and disposes of the Seven Deadly Sins hidden across an apocalyptic Earth. Explore an open-ended, living, free-form game world rich with secrets in this hack-n-slash action adventure, using Fury’s magic to unleash her different forms—each with unique weapons, moves and traversal abilities—to defeat all manner of enemies and explore the world.

Experience Aloy’s entire legendary quest, to unravel the mysteries of a world ruled by deadly Machines and in which mankind is no longer the dominant species. An outcast from her tribe, Aloy embarks on a journey to uncover her past, discover her destiny and stop a catastrophic threat to the future. In this third person action RPG, unleash devastating, tactical attacks against unique Machines and rival tribes as you explore an open world teeming with wildlife and danger. Horizon Zero Dawn on PlayStation Now includes the huge expansion “The Frozen Wilds,” featuring new lands, skills, weapons and Machines.

Test your survival skills in this open world adventure. In the aftermath of a mysterious plane crash, you are stranded in the vast expanse of the Pacific Ocean. Alone, without any means to call for help, you must do what you can to survive. Explore underwater and on land as you hunt for supplies to craft the tools, weapons, and shelter you’ll need to stay alive. Stay sharp: hunger, thirst, and exposure conspire against you as you brave treacherous elements and the dangerous creatures of the Pacific.

Explore the sprawling, devastated Jericho City in this unforgiving third-person action RPG. Fight numerous, ferocious threats, stealing valuable equipment to upgrade your abilities and make you strong enough to take on the most fearsome, imposing foes lurking across the city. With an expanded arsenal of weapons, armors, abilities, implants, and drones to build your character, and a bigger, more varied and more ambitious world, The Surge 2 challenges you to survive and unravel its hidden secrets.

Burn rubber, break rules and shred metal in this full-contact racer from the creator of the FlatOut. Race and upgrade patched-together cars, improving their looks and toughening up their body armor to survive the epic crashes and neck-to-neck fights over the finish line in competitive races. Enjoy some hilarity in Challenge modes as you get behind the wheel of crop harvesters, three-wheelers and much more, then challenge your friends online in multiplayer.